One of the biggest global events in the international calendar gave HM Coastguard the opportunity to show the wider world how it keeps people safe.

Coastguards were on hand in Glasgow during the United Nations COP26 event working alongside other emergency services to make sure no one came to harm.

For Senior Coastal Operations Officer Peter Stewart, the biggest ever national mobilisation of HM Coastguard was the culmination of months of planning.

He said: “We not only brought together coastguard volunteers from across the country but also ensured the correct specialist rescue equipment was in place to support the teams.”

From early in the morning until late at night, the volunteers took part in foot patrols all the way up and down the River Clyde equipped with rescue and casualty care equipment. They were also supported by specialist vehicles and personal watercraft. 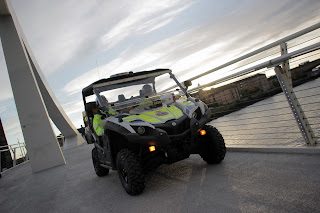 An all-terrain vehicle, usually based in the Isle of Lewis, equipped with rope rescue equipment was brought to Glasgow. The nimble vehicle has a low footprint and is excellent for use both off-road and within urban areas. These attributes were invaluable as it meant it was able to move quickly around the city to support the coastguard teams despite the terrain and some road closures.


On the water, alongside police and fire service boats, HM Coastguard used two rescue watercraft at the event. These were housed on special pontoons so they were available to provide on water cover in support of the teams and the other emergency services. They are versatile pieces of kit which are excellent in a variety of conditions:  deep and shallow water, fast moving and open water, working around debris and structures, holding position and working around people in the water. 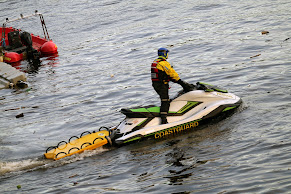 Usually, these rescue watercraft are used by specially trained coastguard volunteers from the Arnside Coastguard Rescue Team in Cumbria where they are invaluable for dealing with emergencies in the everchanging conditions of Morecambe bay. The teams work in the challenging water conditions created by the bay and the tide, including the fast-flowing water under the viaduct and the tidal bore. Members of this team travelled to Glasgow and were supported by other experienced and specially qualified coastguards from across the country.

The rescue watercraft attracted a lot of attention on social media during the event as coastguards made fantastic use of their time while patrolling by picking up litter from the river. This litter is not only damaging to the environment and to wildlife but in fading daylight, can be mistaken for someone in need of help.

A temporary station was located alongside the river and acted as a control point and air shelters were deployed to give the volunteers somewhere warm and dry to get changed. Teams were moved in and out of the area by minibuses which were also used as logistical support and control points.

Head of UK Search and Rescue and Interoperability Richard Hackwell said: “By putting detailed plans in place and giving consideration to the national resources and specialist equipment at our disposal, we were able to ensure we met our primary objective at COP26 of keeping everyone safe.

“The versatility of the coastguard was very evident. Our volunteers adapted to situations and an unfamiliar area and created working relationships with those they’d never met before. Our standardised training and procedures across the country made this possible but without doubt it was the coastguards themselves who shone.

“Much was learnt from the team who planned and worked at the G7 conference earlier this year in Cornwall and that was hugely beneficial to this event and finally I would like to say thank you to all the various teams at headquarters for their support as without them an event of this scale would not be possible.”