November 16, 2021
Two people were rescued from the water after a dramatic multi-agency search effort close to the mouth of the River Axe at Axmouth, in the South West on Sunday evening (14th November).
HM Coastguard was alerted to the incident at around 5pm after a member of the public raised the alarm, reporting that a vessel with three people onboard had got into difficultly.
It soon became clear that the vessel had capsized when attempting to come ashore, forcing all of the crew – who were returning from a fishing outing and not wearing lifejackets at that stage during their trip – into the cold water.
Coastguard Rescue Teams from Beer, Lyme Regis and Wyke along with RNLI lifeboats from Lyme Regis and Exmouth, and two independent lifeboats from Sidmouth were sent to help immediately.
As crews were responding, one of the men from the boat managed to swim to safety ashore and was helped by rescue teams on land while the lifeboat from Lyme Regis was able to locate and rescue another crew member – who was found after having a light with him and floating on his back – approximately 100 metres away from the shoreline.
Due to the dark and testing weather conditions, the coastguard helicopter from St Athan arrived on scene to assist in finding the third and final man, using its spotlights to survey the area. 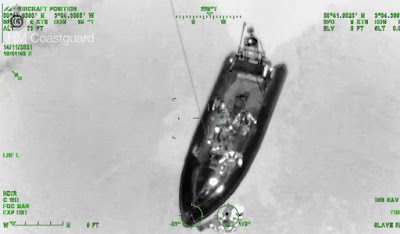 Luckily, the helicopter – working closely with the RNLI lifeboat – was able to pinpoint the man who had drifted approximately 500 metres away from the mouth of the river and some 200 metres offshore. The man was eventually winched into the helicopter and taken to Dorchester Hospital so that further medical care could be provided.
First responders from Devon and Somerset Fire and Rescue Service, South Western Ambulance Service and members from Axe Yacht Club also played an important role in the response.
Terry Hoare, Beer Coastguard Station Officer, said: “This incident could have had a far worse outcome and the three men are very lucky that someone quickly called 999 and asked for the coastguard. This is yet another timely reminder of how important it is to always wear a lifejacket and make sure you keep it on until you reach dry land. Lifejackets save lives. This was a real collective rescue effort by all teams and responders, and we would like to thank everyone for acting so quickly.”