With September now in full swing (just where has this year gone?!) and the weather set to be indifferent for this coming Saturday and Sunday, follow our simple but important checklist if you’re visiting a coastal area:

The August holiday period is sadly now over and while seasons change, safety doesn’t. In a coastal emergency, our message is the same – call 999 and ask for the Coastguard.

Our Coastguard Rescue Teams on the ground, along with our search and rescue partners such as the RNLI, independent lifeboats and fellow emergency services, have been busy responding to a wide-range of incidents at the coast over the past week or so.

From helping people who have fallen on a coastal path to responding to reports of groups of people being cut off by the tide – accidents in the water can happen at any time – often when you least expect them to. Always #RespectTheWater.

In this week’s edition of Safety Spotlight – we’re providing a brief snapshot of some of the incidents our teams have dealt with.

On Wednesday (1st September), Torbay Coastguard Rescue Team were sent to assist a member of the public who suffered suspected injuries to their back and ankle on a coastal path at Langstone Rock, Dawlish.

Always on hand to help, our coastguards located the person and provided on-scene care before transferring them to Dawlish Warren car park and into the care of South Western Ambulance Service NHS Foundation Trust Paramedics. A true example of team work. 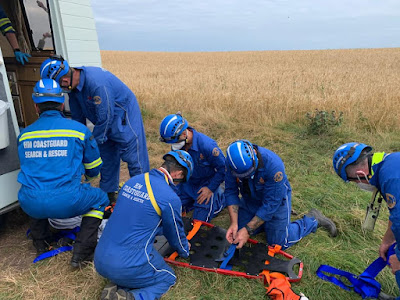 Recently, our Coastguard Rescue Team in Mevagissey, Cornwall, also helped a man who had suffered leg and head injuries whilst being towed behind a speedboat at Pentewan. Our team provided vital first aid at the scene and worked side-by-side, again with the South Western Ambulance Service.

Earlier this week, our Bembridge team – who are based on the Isle of Wight – were called to help a woman who reported that her dog had gone over a cliff edge at Culver. Thankfully, the dog owner did the right thing by alerting the Coastguard – instead of trying to initiate a rescue themselves – with our expert rope rescue technicians reuniting dog and owner. It’s also a timely reminder for you to stay well back from the cliff edge – and make sure that your animals do the same. 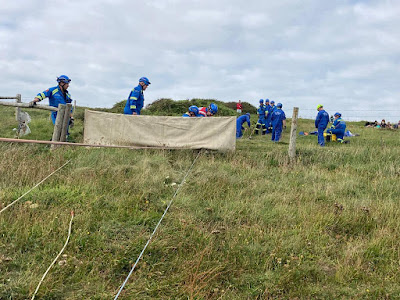 In Padstow, Polzeath Coastguard Rescue Team carried out a rope rescue extraction – helping three people who were cut off by the tide, in a hard to reach area, to safety at Tristram Cliff, Polzeath. Great job!

Last Bank Holiday Monday (in England, Wales and Northern Ireland), our team at Chepstow were out in force in the local area – talking to local people about the importance of coastal safety and volunteering. Good work, team! Read more about how you can get involved, here.