Did you know that in addition to our year-round work to keep people safe around the UK’s coasts, our teams of dedicated volunteers and staff are always on call to lend a hand to other emergency services and partners?

Over the last year, our teams, our vehicles and search and rescue helicopters have been involved across the country providing support where it’s needed most. This Volunteers Week, we’re taking a look back on just a few of the ways in which we’ve come to the rescue in what’s been an extraordinary year.

In Scotland’s Western Isles, our volunteers and staff stepped in to help with carrying essential tests in complex and crucial transportation that involved two ferry crossings and road trips in a 140-mile trip. The search and rescue helicopter from Stornoway also supported NHS Western Isles by moving vulnerable patients from Barra to hospital in Stornoway. And the work has continued with the provision of transport for people needing to attend the vaccination clinics and assisting at the clinics. 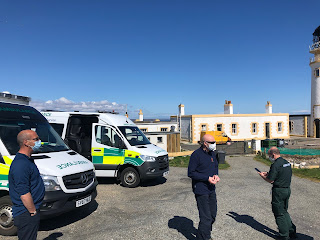 In Suffolk and North East Essex, our coastguard rescue teams worked closely with East of England Ambulance Service NHS Trust. By enrolling as first responders, they were able to help to free up the ambulance service by responding to and travelling to non COVID-19-related patients in need of immediate medical assistance before the ambulance service arrived.

In June last year, people from 300 properties needed to be evacuated as a result of flooding in the Lincolnshire area. Our HM Coastguard teams stepped in to help with the operation, working closely with other emergency services and local authorities.

And in Wales, this was the moment when HM Coastguard’s helicopter battled against the elements to rescue three people including a child, caught up in the floods in North Wales.

The HM Coastguard search and rescue helicopter from Caernarfon was called as part of the wider emergency response to floods across the area alongside North Wales Police, the Welsh Ambulance Service and the Welsh Fire and Rescue Service.

High water had forced the three out of their homes after the banks of the River Dee burst following heavy rainfall. The Aeronautical Rescue Coordination Centre, part of HM Coastguard, took the request from other emergency services after it became clear the people could not be reached by land.

Chief Pilot Dave Kenyon said: “This was a challenging winching scenario in terms of where the people were. They were on a ledge by the roof, with debris falling and being washed away all around them. We’re delighted that all three were got out safe and well, and handed into the care of the other emergency services.”

At the end of February this year, Exeter made the international news headlines when a large, 1,000lb live WWII Hermann bomb was found. Our volunteers and 11 teams from around the region spent over 45 hours at the scene, helping to evacuate people from 2,600 nearby properties including 1,400 university students before the bomb could be safely detonated by Royal Navy experts.

Commenting just after the event, Drew Parkinson, Coastal Operations Area Commander for HM Coastguard said; ‘We are fortunate to have so many dedicated volunteers and staff within HM Coastguard who are willing to drop whatever they are doing at a moment’s notice to use their training and expertise to help those in need, be that at incidents around the coast or when our partner emergency services require assistance.

‘To all the officers who worked phenomenally hard this weekend, with over 1000 individual hours worked in Exeter alone – thank you.’

Just before Christmas last year, many hundreds of people faced days of misery stuck in queues at Dover. We worked closely with other agencies and partners as part of the Kent Resilience Forum (KRF), with a shared priority of keeping people safe, HM Coastguard was on the front line distributing the KRF’s welfare supplies.

Our volunteers and staff worked around the clock, delivering water, food and immediate first aid to the people affected. 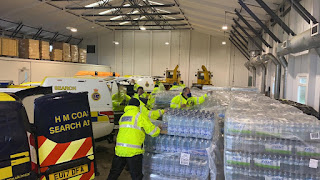 Commenting on the incident at the time, Matt Pavitt, Coastal Operations Area Commander based at the HM Coastguard’s Dover operations centre, said:

“We first became involved on Sunday evening and since then, we haven’t stopped and we won’t stop until we are no longer needed. We’re working closely with our partner agencies and all emergency services in the area to ensure people are kept as comfortable and safe as possible at this difficult time.

“The whole community worked as one team with a common goal and we’re immensely grateful for everyone’s support. And I’d like to say a special thanks to our teams who always go above and beyond the call, we are very proud of their dedication and the work they are doing now and all year round.”

Alun Newsome, Divisional Commander, HM Coastguard added:  “Keeping people safe around our coasts is what we do. Less well known is that we also work closely with emergency services partners to deliver mutual aid in the event of emergencies when the health and well-being of people is at risk. I’d like to add my thanks to all our teams and our partner agencies for the impressive efforts that are going on right now in the Dover area.”

Our volunteers and HM Coastguard staff around the UK are on call 24/7, 365 days a year. One hand to help our emergency services partners and other authorities at any time when people are in need.

To our volunteers: We salute you!