June 14, 2021
While the work of the G7 might not have started until the first session got under way, the preparations for the event in Carbis Bay began many months before.
Emergency services, military, local and regional authorities all gathered months in advance to make sure that everything would go as smoothly as possible. Also at the table was HM Coastguard looking to keep everyone safe at the beach and the coast, whatever the reason for their visit.
Martin Leslie is the Coastal Operations Area Commander for Cornwall.
“I’ve been living this since January,” he said. “This has been something months in the planning across the team, in terms of the logistics, the anticipated events and the preparation to make sure whatever happens, if someone gets into trouble at the coast, we’ll be ready to respond.
“We took into account things like road closures for the event or the challenges that protests might have given us and took the view, for example, that we needed to have our teams at various times on station during the G7 event.” 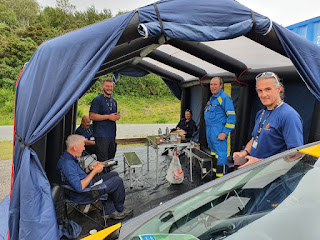 “This had to be planned with military precision,” he said. “Cornwall is one of the go-to places for people when they look to go on holiday. While we had to be prepared for the G7, it was also important to remember that we also had to cover all the other incidents we get anyway on a day-to-day basis.”

“We’re very grateful to our colleagues at the Joint Maritime Security Centre and to those in the Joint Rescue Coordination Centre who were there to support and back us up where needed.”

Balancing business as usual alongside the small matter of a massive global event was key - as was working as part of a multi-agency set up. HM Coastguard was involved right from the start, representing maritime safety at key strategic groups and had people based at Devon and Cornwall Police Headquarters for the whole of the G7 as part of the high-level response. 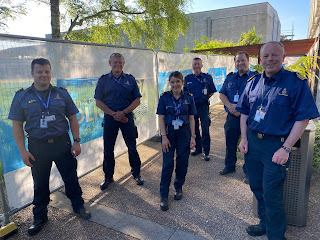 One of the challenges that faced all of those involved was the very warm and sunny weather.

Chris said: “It became clear fairly early on that we would really need to make sure our teams were kept hydrated and safe in that hot sun. It’s something easily overlooked by even the coastguards themselves and it became a very important message to them to make sure they kept cool and hydrated.” 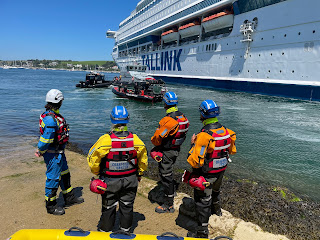 Some coastguard rescue teams St Ives, Mullion, Portreath, Penzance and Falmouth - were based at their stations for the entire G7 event – with others – Lands End, Newquay, St Austell and Mevagissey on station for particular highlighted days.

And while the leaders may now have all departed and the eyes of the world are no longer on Carbis Bay, the eyes of HM Coastguard in Cornwall continue to be on all those who visit, whatever their reason.

Martin said: “It doesn’t matter who you are or why you’re here at our coast. We’ll continue to be on call, continue to respond and continue to keep people safe when they visit our beaches and coastal areas.”