Safety Spotlight - Cliff slip calamity and a close call. Don't let it happen to you

Majestic and beautiful, our coastal cliffs are there to be enjoyed but a slip, trip or fall can happen in a split second. Don’t let a cliff calamity happen to you.

Just last week, a slip up on a sunny day out on cliffs in Dorset turned a lovely walk with friends into a very close call. It could easily have been so very much worse.

Alex Tridico slipped on the cliff edge at popular walking spot Old Harry Rocks on May Bank Holiday weekend and fell around 100 feet into the water below. Miraculously he survived, with serious but treatable injuries; three broken ribs and a collapsed lung.

From hospital just a few days after the incident, Alex told ITV’s Meridian News that when he slipped, his first thought was “this is it, that’s where I’m going to die”.

“There was nothing near me to grab or try to hold onto,” said Alex. When he knew he was going to fall, he made a split second decision to push himself as far away from the cliff as he could. That move probably helped save his life as the tide was high that day, so he landed in the water rather than on rocks.

A group of kayakers were enjoying a day’s paddle nearby, led by guide Kyle Prosser. They saw the accident, and contacted the Coastguard immediately as they knew that HM Coastguard is on call 24/7 to co-ordinate the emergency services and help people in difficulties around our coasts. And other members of the public who were out walking also did the right thing by calling 999 asking for the Coastguard.

Emergency 999 Calls to the Coastguard

Within seconds of receiving the alert, the teams at HM Coastguard sent the RNLI lifeboats from nearby Swanage which arrived on scene within 10 minutes. They also summoned the South West Ambulance Service and alerted the search and rescue helicopter from Lee-on-Solent. Meanwhile the Coastguard Rescue Team from St Albans Head was sent to ensure the concerned onlookers on the cliff path did not risk their own safety by approaching the edge. 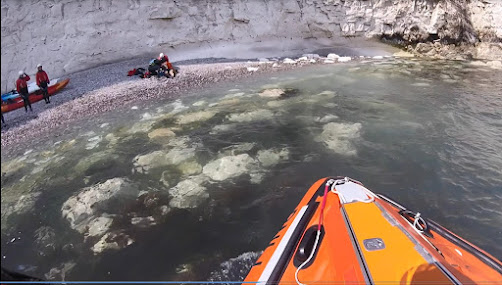 Alex was found conscious and breathing and a full assessment was carried out to ensure he was able to be safely transported by the lifeboat to Swanage and passed into the care of the waiting medics.

At the time of the ITV Meridian’s news report after the incident, Alex was expected to spend a few days in hospital before returning home. This time, the result was good, Alex was incredibly lucky but the outcome could very easily have been different.

Don’t let it happen to you by following our safety tips below.  But if you see anyone in difficulty around the coasts, call 999 and ask for the Coastguard, we’re on call 24/7, all year, all weathers.

How to avoid a cliff calamity