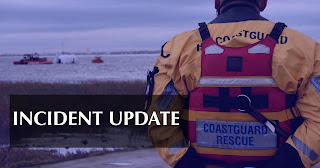 Coastguards are pleading with youngsters not to engage in pranks for social media involving swimming and alcohol after a girl and boy were recovered from the water at Alfred Dock, Seacombe this evening.

The girl, a non-swimmer, had gone into the water with a bottle of alcohol and the boy intended to swim out to her, drink the bottle, and then attempt to rescue her. The prank was being filmed by another friend for social media.  A 999 call alerted the Police to the two teenagers who had soon gotten into difficulties. The police then contacted the Coastguard who sent the New Brighton and Crosby Coastguard Rescue Teams and the New Brighton RNLI Inshore Lifeboat. Mersey Fire and Rescue, Mersey Police and the North West Ambulance Service also attended. The male self recovered and Police threw a line to the female and recovered her from the water.

“For a few seconds on social media, these young people were willing to risk losing their lives. Every year, the Coastguard deals with fatal incidents, where alcohol is a causal factor. Please don’t drink and drown.”