A couple from Dorset have been retelling the moment they had to call 999 for the Coastguard and warning how ‘it could easily happen to you’ after they got into difficulty at the coast.

Back in 2014, the couple set off for a quiet afternoon walk along the beach at Charmouth, the tide was out and the shingle beach was wide but the walk turned into a nightmare when part of a cliff collapsed. 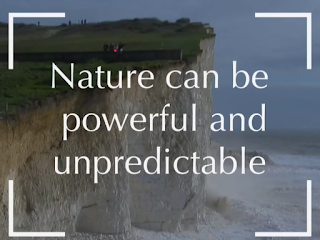 Debris from the cliff fall blocked their way back to the car park and their only other option – going through the sea – was even more dangerous as they would have been swept away. They had only one decision they could make.

They said: “We didn’t want to make the situation worse than it already was by putting ourselves in further danger and therefore called 999 and requested assistance from the Coastguard.”

The couple was winched to safety by search and rescue helicopter. They were told that another half an hour and the tide would have covered the beach where they had found themselves trapped.

They said: “Afterwards you question whether there is anything you could have done differently but we are not daft and we are not the kind of people to take unnecessary risks. This sort of thing could happen to anyone and is a stark reminder of why you always need to have your wits about you at the coast.

“More than ever, we now always make sure our mobile phones are fully charged before we head out and that we are aware of tide times.”

If you’re going to the coast, make sure you check the COVID-19 rules for your area and the area you’re intending to travel to and that you have a way of calling 999 to ask for the Coastguard if something goes wrong.