HM Coastguard called in explosives experts and other authorities to a beach in Formby, Merseyside following a report of a suspected metre-long wartime bomb. 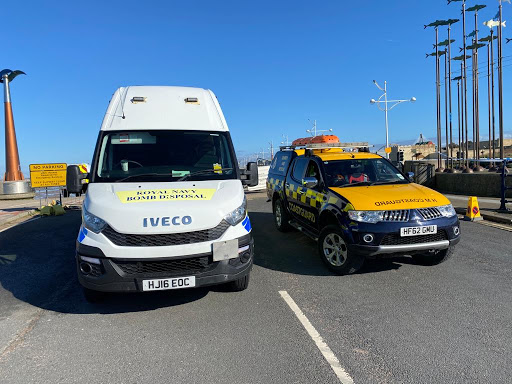 In co-ordinating the response to the incident, Southport and Crosby Coastguard Rescue Teams and Senior Coastal Operations Officers, the Royal Navy’s Explosive Ordnance Disposal (EOD), the lifeboat from the Southport Offshore Rescue Trust and Merseyside Police were on the scene this morning (26 February).

The report of the ordnance was made to HM Coastguard Operations Centre at Holyhead by Merseyside Police at 8.45pm last night (25 February) following a report from a local member of the public. Photographs were sent to the Navy’s EOD team and they arrived on scene in the early hours of this morning to prepare for the safe detonation.

The device was cylindrical and estimated to weigh around 1000lb. It was safely detonated by the EOD under the water at around 11am today.

Video taken from a safe distance by Southport independent lifeboat.

A full safety cordon was placed around the Mad Wharf Sands area of the beach as a safety precaution. HM Coastguard also issued safety broadcasts requesting that vessels stay clear of the area. The Southport Coastguard Rescue Team will return to check the area at low tide today as an additional precaution.

Izzie Roberts, Senior Maritime Operations Officer at HM Coastguard’s Holyhead Coastguard Operations Centre  said:  “We have been working with all our partner authorities to make sure that the public and vessels in the area are informed and kept safe while the EOD were taking measures to dispose of the device safely. From the information we have at the moment, the device is likely to be an old German torpedo.”

If you see anything unusual – ordnance?

Ordnance can wash up or become exposed around the UK coasts at any time of the year but especially after rough weather and with spring (high) tides. Members of the public are asked to report anything that looks unusual straight away by calling 999 and asking for the Coastguard and not to touch or move the item or items.

“Spring and autumn are particular times when ordnance can be uncovered around our coasts. We’d urge anyone who sees anything that looks like it shouldn’t be there to stay well back, not to touch it or move it and call us immediately on 999 so we can investigate and call in other authorities to make the area safe,” added Izzie.