Her Majesty’s Coastguard is wishing a very happy retirement to Martin Sykes, who has been a valued member of the team at the Shetland Coastguard Operations Centre for over a quarter of a century.

Martin joined the Coastguard in 1995 as an Operations Room Assistant (ORA) and later, in December 1996, became a full-time Coastguard Watch Assistant (CWA).

He then went to work in other roles, including Watch Officer and Maritime Operations Officer and Senior Operations; and also gained a Search and Rescue Mission Coordinators (SMC) qualification.

For many years, Martin has helped to coordinate responses to incidents on the Island, throughout the rest of Scotland and further afield.

Martin, who was a lab technician in Teesside before moving to Shetland in the mid-1990s, completed his final shift this month and received leaving gifts from colleagues, which included cake (and plenty of it!), lots more sweet and savoury snacks and beverages, a coastguard mug and a coastguard-themed retirement card – in the form of a mock-up ‘Coastguard Times’ newspaper front page!

“It has been a tremendous privilege to serve the local community and I feel really fortunate to have been part of the HM Coastguard family,” Martin said. 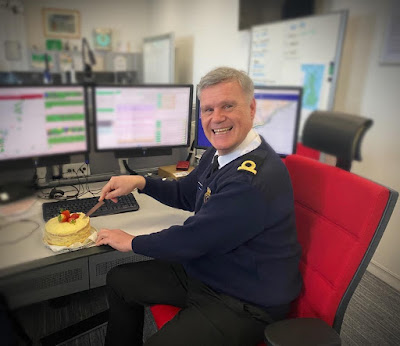 “The years have really flown by since I started with the Coastguard and I’m looking forward to spending some time, during my retirement, recalling and looking back at some of the amazing memories I have made and indeed cherish – as well as the long-lasting friendships I have formed.

“I’m going to be busy as a grandfather in retirement but I’m looking forward to visiting my former work mates in the Operations Room in the near future, and always keeping tabs on events at the coast.”

Errol Smith, Maritime Operations Controller at the Shetland Coastguard Operations Centre and a long-time friend and colleague of Martin’s, added: "Everyone connected with HM Coastguard, past and present, would like to congratulate Martin on his distinguished and dedicated service with the Coastguard in Shetland.

"Martin has been a key member of the Shetland team for nearly 26 years and has played his part in so many ways – from working on major incidents in the heart of our control room to passing routine safety advice to the general public utilising his friendly, approachable and professional personality.

"We'll miss having Martin around day-to-day, especially his antics and frequent renditions of 70s jingles; it lightened the room – even at the hardest off times – but we look forward to catching up with him in the near future to celebrate and hear all about what he has been up to in retirement! Being a doting grandfather I suspect he will be as busy as ever. We wish him all the best.” 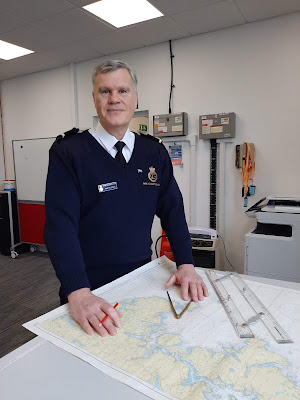