Her Majesty’s Coastguard continues to respond to a variety of weather related incidents during this period of stormy weather in the UK. 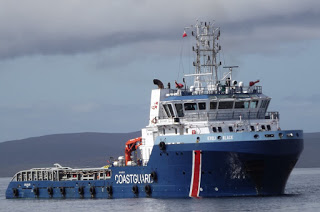 Conditions at sea in the far North of Scotland were severe with forecasts of up to Storm Force 10 and on Saturday 31st October, HM Coastguard tasked the Emergency Towing Vessel, (ETV) IEVOLI BLACK to proceed to the assistance of a large cargo vessel with engine failure North West of the Shetland Isles.  On 1st November, the vessel reported to HM Coastguard that repairs had been successfully completed and the vessel continued her voyage and the ETV was stood down. HMCG continues to monitor the vessel’s passage.

HM Coastguard also continues to monitor two separate incidents involving the loss of containers from container ships, both in the Pentland Firth and also in the Bristol Channel. In Scotland, shipping containers are adrift in the Pentland Firth after being lost from a container ship on Saturday 31st October.  33 containers have been confirmed as lost and two of these 40 foot containers have been reported ashore in South Hoy, Orkney. The ETV is acting as a guard vessel in the Pentland Firth, and the Northern Lighthouse Board is also assisting with the search.  The Northern Lighthouse Board's vessel PHAROS is scheduled to take over guard vessel duty from the ETV later today.  A Coastguard aircraft is also conducting overflights of the area today (Sunday 1st November). 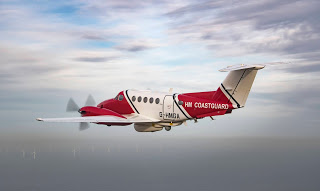 11 Containers were also lost from a different vessel on October 20th off the South West of England and the Bristol Channel.  The Maritime & Coastguard Agency’s Counter Pollution team, Trinity House, ship’s owners and insurers; and a number of commercial contractors – including chartered vessels – are engaged in ongoing searching and recovery and containers have come ashore in both Devon and Wales. Relevant authorities have been informed and are being regularly updated. The MCA’s specialist fixed-wing aircraft has been conducting overflights of areas, to assist in the search for containers. Local shipping warnings are continued to be issued by HM Coastguard to advise other vessel traffic in the area and contingency arrangements are under way for container recovery with salvage contractors. A Trinity House vessel is acting as a guard ship to assist in this task. 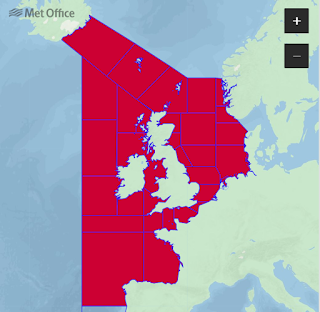 Gale warnings (in red) are in place from the Met Office for all areas through Sunday 1st November.

The Maritime & Coastguard Agency’s Counter Pollution team has requested overflights of the areas where containers are still adrift, (when weather permits) to assist in the tracking of containers, and also to search for any that may have come ashore. Local shipping warnings continue to be issued by HM Coastguard to advise other vessel traffic in the areas affected. 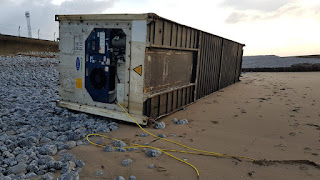 Members of the public are urged to keep well clear of containers washed up ashore for their own safety and should be aware that contractors may be carrying out recovery work in the coming days.

For members of the public wishing to report a sighting, please contact the nearest Coastguard Operations Centre: https://www.gov.uk/government/organisations/maritime-and-coastguard-agency/about/access-and-opening