Four people rescued after being cut off by the tide at St Margaret’s Bay, Kent.

HM Coastguard received a 999 call just after 9 this morning (29 November) from a member of the public saying that they could see four people, standing on rocks and waving, after being cut off by the tide at St Margaret’s Bay, Kent.

Deal and Langdon Battery coastguard rescue teams and Dover RNLI lifeboat were sent. The people were taken onto the lifeboat and taken safely to shore, all four were cold but otherwise safe and well.

Kerry Chapman, HM Coastguard said, The group were extremely lucky to be spotted by a member of the public who called 999 and asked for the Coastguard. They were in a very precarious position and their morning walk could have ended very differently.

Remember always check the weather and tides before you set out so you can prepare accordingly. Consider whether you could become cut off by the incoming tide and don’t take unnecessary risks. Take a fully charged mobile phone with you so you can call for help if the worst should happen.

If you get into difficulty or see anyone in trouble along the coast and out at sea call 999 and ask for the Coastguard. 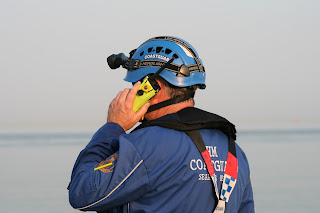