October 22, 2020
In Sunday night’s ‘Emergency Rescue: Air, Land & Sea’ we saw Chrissy being rescued after she took a dramatic fall from a cliff while walking her dogs. Chrissy’s partner Paul heard rocks fall but when turned around Chrissy was nowhere to be seen.
Naomi and Jo from Lands End Coastguard Rescue Team were amongst the first on scene.
Naomi said: "It was clear as soon as we arrived that Chrissy was in a bad way, she was bleeding heavily from the head and complaining of pain in her neck and back. We were on scene with an ambulance crew and critical care paramedics from the air ambulance. We all quickly agreed that it would be best to have her winched out by the coastguard helicopter rather than try to carry her out over the rocks and up the cliff by a stretcher."
Jo said: "Chrissy was in a lot of pain, and looking how far she had fallen we all feared that she would have potentially life-threatening or life changing injuries. When we heard that Chrissy made a good recovery we were absolutely thrilled, it gives us real pride to know that we played our part in giving Chrissy the help and care that she needed."
Our coastlines really are beautiful, but they can be dangerous. If you’re going out on a coastal walk check the weather and tides before you heard out. Take a fully charged mobile phone and tell someone where you are going and when you will be back.

If you’re on a cliff top, stay back from the edge, cliffs can be slippery and really crumbly especially when wet. And remember if you see anyone in difficulty at sea or along the coast call 999 and ask for the Coastguard.
If you’ve missed any of the ‘Emergency Rescue: Air, Land & Sea’ action, don’t worry you can catch up on demand here.

Don’t forget to tune into Sunday’s brand new episode at 9pm on More4. 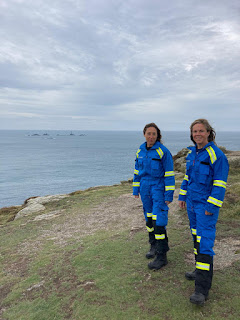