In last Sunday’s episode of ‘Emergency Rescue: Air, Land and Sea’ (11th October), we saw Portscatho Coastguard Rescue Team carry out a cliff rescue after Remi the brown Cockapoo got distracted on her walk by birds.

Unfortunately, Remi didn’t see the cliff edge as she excitedly chased after her prey – prompting a rescue effort.

Debs Walker, who has been a member of the Portscatho team for 11 years, said: “I think people would be surprised how often dogs do get into trouble along the coast. We can be called to dogs who not only find themselves stuck on cliffs but also being carried out to sea. They only have to be chasing a bird or a rabbit, I don’t think they see past that, and before they know it, they are a few hundred feet down a cliff or being dragged out to sea.

“We all love our pets, they really are part of the family and we want them to be safe, so keeping them on a lead near cliffs or the sea is ideal. But if the worst does happen, please don’t put yourselves at risk. We’re specially trained to carry out cliff and water rescues, we have all the safety equipment, so we would much rather you called 999 and ask for the coastguard rather than put yourself in danger.”

You can catch up on ‘Emergency Rescue: Air, Land & Sea’ and watch last week's episode to find out what happened with Remi, here: https://www.channel4.com/programmes/emergency-rescue-air-land-sea. 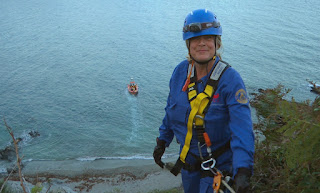