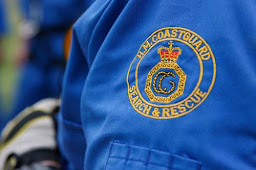 HM Coastguard received a 999 call from a member of the public, just before 18:40 yesterday evening (15th August) saying that three people were in difficulty in the water near to St Anne’s Pier, Lancashire.

One person made it to shore and was checked over by paramedics.

A search is ongoing for the other two people.

The search was suspended briefly in the early hours and continued at first light. The coastguard helicopter is no longer on scene and a police helicopter has joined the search.

We have no further information at this time.