The HM Coastguard Search and Rescue helicopter base at Prestwick, on Scotland’s west coast near Glasgow, has surpassed a major milestone after responding to 1,500 calls for support since 2016.

Prestwick chalked-up its 1,500th task when a child was spotted adrift in a dinghy off the Ayrshire coast and required assistance. Captain Mark Randall, Captain Roger Stringer, winch operator Dylan Burns and winchman/paramedic Darren Jones were the on-duty crew.

Other notable events since go-live in 2016 include the rescue of a 22-year-old male surfer found 13 miles off the coast of Campbeltown in 2017. High winds swept Matthew Bryce out to sea where he clung to his board for a staggering 32 hours before the crew at Prestwick winched him to safety.

In October 2019, a woman fell 100m down a ravine while mountain climbing near Oban. Her 10-year-old son scrambled to her side, using her phone to raise the alarm. The Prestwick helicopter crew worked with Oban Mountain Rescue Team to winch the woman to safety.

The milestone task comes as HM Coastguard’s UK Search and Rescue helicopter service, operated by Bristow Helicopters, celebrates its fifth anniversary. Bristow was awarded the 10-year contract by the Department for Transport in March 2013.

Capt. Craig Sweeney, Chief Pilot at Prestwick, said: “Ensuring that we deliver a consistently safe and efficient search and rescue service around-the-clock is what drives us. This latest milestone is testament to the dedication of our skilled team, which has been unwavering in increasingly challenging times.

“At Prestwick we can be called to a wide range of taskings – from the southern Highlands of Scotland to the northern Lake District in England, and across Scotland’s central belt, responding to around 25 calls per month.”

Director of HM Coastguard Claire Hughes said: “There are people right across the UK and even further afield who owe their lives to the HM Coastguard search and rescue helicopter crews. We are grateful for their continued support, particularly during these challenging times. Each milestone is a testament to the sustained hard work and commitment of our crews.”

In addition to responding to incidents, the crew also conducts regular training exercises to maintain high standards and ensure they are prepared for any eventuality. 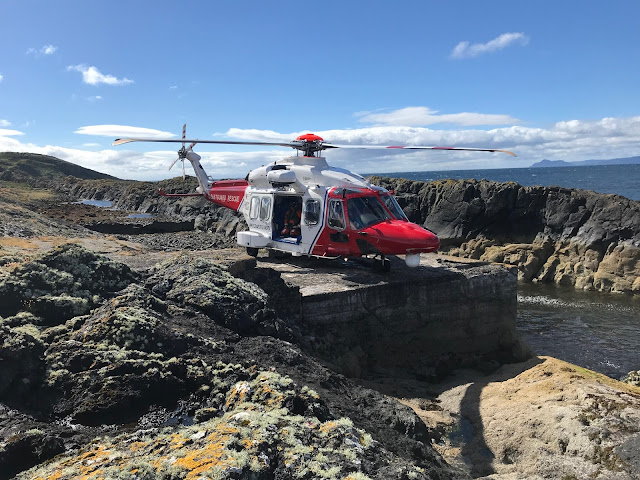 The base initially operated Sikorsky S-92A aircraft, later becoming the first UK SAR base to operate the new AW189 aircraft type in 2017.

Prestwick is one of 10 bases strategically located around the country near areas where search and rescue incident rates are high. The other bases around the UK are at Sumburgh, Stornoway, Inverness, Lydd, Caernarfon, St Athan, Humberside, Lee-on-Solent and Newquay.

The HM Coastguard Search and Rescue helicopter service is operated by Bristow Helicopters Limited on behalf of the Maritime and Coastguard Agency.