A volunteer from the Hull Coastguard Rescue Team (CRT) has been recognised for his performance and dedication and named as coastguard of the year 2019.

Alan Stewart has been with the team for 8 years and works as the station officer supporting the Hull CRT. He was presented his award by the Chief Executive of the Maritime and Coastguard Agency Brian Johnson. 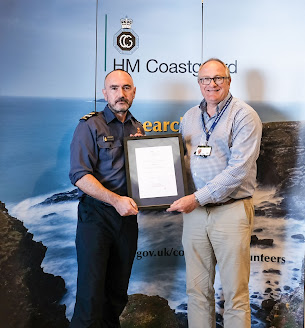 2019 was the busiest year to date for the Hull team who attended 240 callouts. The Hull CRT was relatively inexperienced in service with 8 out of 11 members of the team having only been on call since December 2018. Alan, along with the other 2 existing volunteers on the team committed many hours assisting the new entrants to practice and develop their skills, supporting and supervising them at incidents and helping them to develop into confident and competent coastguard rescue officers.

Senior Coastal Operations Officer Fran Wilkins said: “To lead a newly formed team through such a busy year is an achievement which in my opinion can largely be attributed to Alan and the pride and commitment he has to being a member of the coastguard rescue service.

“Whilst this award is for Alan, it is very much an acknowledgement of the quality of the team around him who are all motivated and enthusiastic about their role within HM Coastguard.”

As well as being the station officer at Hull, Alan will happily volunteer his time to support HM Coastguard more widely. He recently attended a workshop looking at future technologies for the service and at the start of the year he attended Westminster to represent HM Coastguard at meetings with local MPs to discuss suicide prevention.

Alan also sought specialist training for his team to help them to deal effectively with people who are threatening to harm themselves and shortly after this training Alan and another member of the team were able to successfully prevent an incident and saved a life.

Fran added: “Alan stands out as a coastguard and a station officer for many reasons – not least, the time he gives to the service and the pride he has in not only his own performance but also that of every member of his team.

“He drives the team forward with training to develop them individually and as a team, he seeks out opportunities to highlight our work to others and grabs opportunities to improve response. If you asked him he would no doubt say there are better role models available but his team refer to Alan as being their guide for how a coastguard should be.

“Alan has my utmost respect for everything he does for the coastguard rescue service.”