It’s easy to get caught out at the coast


It’s easy to get caught out at the coast. We’ll respond to every 999 call, but you can help us to help you by making sure you’re prepared and not taking any unnecessary risks.

No matter how experienced or local, anyone can run into difficulties, as Ben Lacey knows only too well. 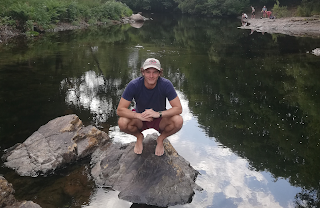 The 20-year-old, who has been coasteering many times, got caught out by the tide despite knowing the area well, when he climbed along rocks at Lantic Bay, Cornwall, on June 24.

Ben said: “I was rather silly in thinking that I wouldn't be caught by the tide as I was coasteering along the rocks that peppered the coastline, but surely enough, I was. After realising that I couldn't get back to the beach the way I came I decided it would be a good idea to climb up the cliff face and make my way to the coastal path. In hindsight, this was an awful decision.

“The coastal path was far further than I had expected, and head high brambles made the climb almost impossible. With no way up or down I was well and truly stuck, and I’d left my phone with friends on the beach.

“After some time had passed a boat spotted me and decided to call for help, and sure enough the coastguard helicopter swooped in and thankfully managed to hoist me up and rescue me.

“I escaped with just some cuts and bruises but without the assistance of the coastguard I would have definitely made an attempt to either climb back down the cliff face, or further progress up towards the coastal path, both of which would've taken a long time and would've been at a great risk to my health and possibly my life.

“It’s definitely made me think twice and I’ll certainly be taking more care on the coast in the future. I’m very grateful to the helicopter operators and volunteers on the ground who were immensely kind and helpful throughout.”

If you see someone in trouble at the coast call 999 and ask for the Coastguard.