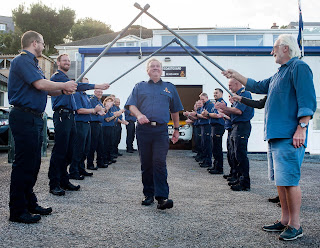 On Monday, Penzance coastguard rescue team bid a fond farewell to station officer Tim Stevens after an incredible 42 years within the coastguard rescue service which have seen him play a part in some of the largest search and rescue operations of recent times.
Tim, 66, joined the coastguard as a general purpose auxiliary on July 27 1978, with duties which spanned both watchkeeping and rescues.
In December 1978, just a few months after signing up, Tim was taking part in a training session when he overheard a conversation about an ongoing major incident. He offered to help and found himself involved in the attempt to rescue those onboard German barge carrier MS Munchen, a vessel with 28 people onboard which sent out a distress call 100 miles north of the Azores. Sadly, despite a huge effort involving more than 100 merchant vessels and 20 aircraft, no survivors were ever found.

Tim said: “It was a baptism of fire to say the least. And less than a year later I was involved in one of the largest ever search and rescues; the Fastnet race disaster. I was called at work for a bad weather watch – by then yachts had already set off from Cowes. For days Lands End coastguard worked to co-ordinate the rescues of those onboard those yachts. 15 people lost their lives, but 136 were rescued. We were awarded the Golden Anchor for our efforts.
“There are incidents that do take a particular toll. In December 1981 we were sent to search the cliffs at Lands End after the boat Cargo Union Star sent out a distress call, with a view to rescuing crew members. That night, eight people onboard and eight people on Penlee RNLI lifeboat lost their lives. It was very distressing for everyone involved.”
Tim spent 15 years with the Lands End team, before joining Penzance in 1993, where he’s served for the last 27 years, 23 as station officer.
He said: “I’m sad to be leaving of course, and I’ll miss the team but I believe I’m leaving at the right time. Over the years the training, procedures and equipment have improved immeasurably, and I believe that things have never been better. 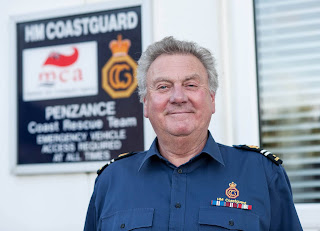 “The thing that hasn’t changed though is the commitment from those who give their time to the coastguard rescue service. I’m very proud to have played my part.”
Pics: Colin Higgs, Portreath Studio