Beach visitor rescued after being caught by incoming tide at Fleetwood

May 24, 2020
A lady has been rescued from the water at Fleetwood this morning after being caught out by the incoming tide.

On arrival, Fleetwood Coastguard Rescue Team rescued the lady from the rough sea and she was treated for exposure to the cold by NW Ambulance Service.

A spokesperson at Holyhead Coastguard Operations Centre said, "It must have been a frightening experience for her and on initially making the 999 call to the Coastguard the water was up to her knees but within ten minutes it was up past her waist.
'The casualty got into difficulty while litter picking on the beach but had not checked the tide times and wrongly assumed the tide was going out, when it was in fact coming in. This resulted in her getting cut off on a sand bank with water all around her, when she tried to wade ashore she got stuck in the sand.'

HM Coastguard is asking everyone to take extra care at the coast - for more, please check the advice in our new coastal safety campaign from HM Coastguard and RNLI. 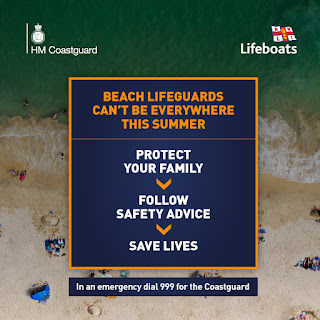