May 31, 2020
Three crew members were saved from a sinking fishing vessel in a dramatic rescue late on Saturday evening (30th May).

Her Majesty’s Coastguard were alerted to the incident when the vessel's EPIRB (Emergency Position Indicating Radio Beacons) activated sending a Distress 406 MHz signal from a position 76 nautical miles North-East of Flamborough Head, in the north sea.

The crew, who were in the wheelhouse at the time the vessel sank were unable to raise a Distress call by any other means. They managed to swim clear of the vessel and reached their inflated life raft.

When responding units arrived on scene the crew fired flares and shone their torches to further help determine their position. All crew were soon safely recovered from their life raft by fishing vessel Stella Nova IX while the paramedic from the Coastguard helicopter conducted medical assessments. Whitby RNLI then returned the crew to Whitby.

Dai Jones, Duty Controller for HM Coastguard, said: “When an emergency beacon is activated we have to assume the worst, that a vessel is in difficulty and people are in need of urgent help.

“Personal Location Beacons (PLBs) and EPIRBs are a really effective and vital tool in an emergency, but even more so if they are registered to a person and vessel, so help us to help you, and make sure you and your vessel are registered and up to date. It’s free to do.” 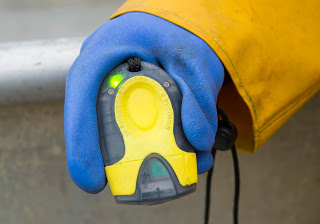