April 18, 2020
HM Coastguard has been coordinating a multi-agency response after eight people were cut off by a rockfall at Shanklin on the Isle of Wight.
The incident was reported around 4.40pm today (18 April) and the initial concern was that some of those involved might have been trapped under the rocks.
Bembridge and Ventnor Coastguard Rescue Teams were both sent to the scene, along with Isle of Wight Fire and Rescue Service and The Sandown and Shanklin Independent Lifeboat .
The HM Coastguard helicopter from Lee-on-Solent was also sent along with Hampshire Police and the Isle of Wight Ambulance Service.
There were two different groups on their exercise walk and they were rescued using socially distancing procedures. No-one is believed to have been injured.
David Hurden, Senior Maritime Operations Officer for HM Coastguard said: ‘There is nothing to suggest these two separate groups were breaking lockdown rules. They were socially distancing from each other on a walk near to their homes. We’re thankful that no-one has been injured in the incident and that people did the right thing by calling 999 and asking for the Coastguard.’ 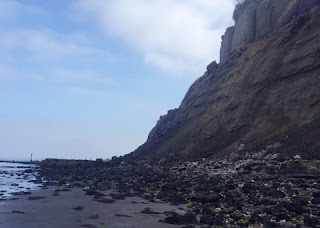