Being a coastguard volunteer can be physically demanding and can require the team to work in hazardous situations for long hours at any time of the day or night.
Women and men work side by side on our teams and the number of women has been steadily rising. In the last three years the number of women has increased by 26%.
To celebrate International Women’s Day we've spoken to three members of the Lands End Coastguard Rescue Team in Cornwall which has 5 women volunteers out of 9 in total.

An opportunity to give something back and to help people inspired Sarah to begin volunteering 10 years ago.
Sarah has a business producing and selling chili relish, is an occupational therapist and helps to run a farmer’s market once a week but still manages to fit in volunteering as a coastguard and enjoys never knowing what she’ll find herself facing when called out.
Sarah said: “Being a coastguard volunteer can be intense, you spend so much time with someone at a critical point in their life but it is so rewarding. 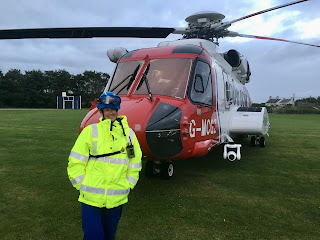 “The whole team muck in and do whatever has to be done. No one member of the team is more valuable than another.
“One of my most memorable call outs was to a lovely man who had become unwell. The team spent around an hour with him and managed to get him up the cliff in one of our trucks but he sadly took a turn for the worse once we reached the ambulance. The team were all shell shocked by his death.
“If you are considering volunteering then I would say go for it. It is amazing to help someone at their lowest point and to make a real difference to their life. You go into situations you could never imagine or prepare for but you go into them as a team and come away having made a real difference.”

Five years ago Jo made the decision to apply to volunteer with the Lands End Coastguard Rescue Team in Cornwall.
Jo’s home is close to the cliffs and she would often see the team in action and in 2015 decided she wanted to be a part of it and be there to help people and reassure them when they are in difficulty.
Jo works from home running holiday lets with her husband. Running their own business gives her the flexibility to volunteer. Jo said: “Due to my holiday let business and wanting to be there for the holidaymakers I rarely go away myself and therefore I am usually around to help. 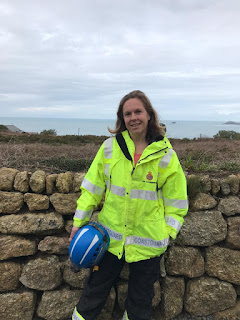 “I really enjoy having the opportunity to do something where I work as part of a team and have people around me. Being called out on a job gives me a challenge and completely changes up my day.
“My husband is a little bit jealous as I think he would actually like to do it too but someone has to be at home with the children! I have two young girls and it is lovely to be doing something brave and worthwhile that makes them proud of me.”
Jo’s most memorable rescue happened when she was fairly new to the team. “Someone had fallen a long way down the cliff and I was the first on the scene. We scrambled down and I was in the thick of it. We worked with the search and rescue helicopter which is always really exciting. The women who fell has since made a remarkable recovery.
“We are not magicians but we are there to help and to reassure people in their most desperate times.
“Our team is a cliff based team and we have specially trained rope technicians but those of us who stay at the top of the cliff are just as important and vital to the team. Nobody in the team is trying to be a hero, we all play to our strengths.”
Jo takes part in around 30 rescues a year. “I respond and take part in as many as possible. A lot of the women on the team have children and their children obviously have to come first but volunteering is important to us and we will get there when we can.
“I would tell any woman (or man) out there who is thinking of volunteering to go for it. You don’t have to know anything beforehand, just be enthusiastic. It isn’t all jumping over cliffs, some of us are comforting the casualty and making sure they are warm and the sun isn’t in their eyes. These things matter and their importance shouldn’t be overlooked.”

Naomi is the deputy station officer for the Lands End Coastguard Rescue Team and after 16 years of being part of the team she would urge anyone thinking of volunteering as a coastguard to not even hesitate.
“It is great when you get a chance to really help someone. You see them go from fear and high anxiety to calm when they realise help is on hand. It is a feeling that can’t be replaced. 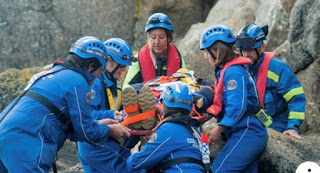 “You get an opportunity to learn a host of new skills such as climbing and rope rescue. I had done a bit of climbing before but I certainly wasn’t an expert.
“Our team has an almost 50/50 split of men and women and we all work brilliantly together. We all have our strengths and roles but gender doesn’t come into it.
Naomi also works as a community asset worker helping to reduce the social isolation of adults in Cornwall. Through my work with the Coastguard I have met a lot of people who are very isolated and have become ill as a result. There are certain skills that definitely transfer from coastguard to my work and vice versa and I really understand the true value and importance of community engagement and social interaction.
Volunteering and helping others has always been a part of family life in Naomi’s household. Naomi’s second child was only six weeks old when she joined the Coastguard. She said: “My family are proud of what I do and already have a lot of life saving skills themselves, my eldest has now begun to volunteer alongside my husband on the RNLI lifeboat.”