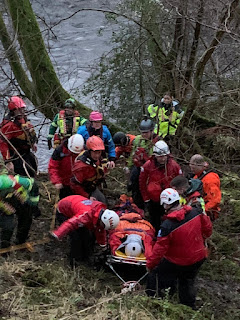 An injured kayaker was airlifted to hospital by the HM Coastguard search and rescue helicopter from Caernarfon over the weekend (Saturday 1 Feb) from woods, in Cotherstone, County Durham. 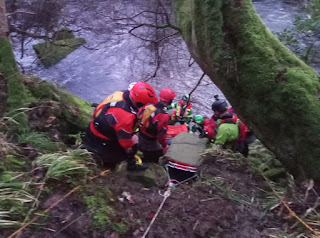 The kayaker was in the River Tees when he capsized, suffering upper body injuries at around 2.30pm on Saturday. The group he was with was able to help him onto the river bank and call 999 for help.

HM Coastguard’s Aeronautical Rescue Coordination Centre (ARCC) received a call from North East Ambulance Service just after 3.30pm, asking for helicopter assistance as the casualty and his group were in a difficult-to-access area.

Teesdale and Weardale Mountain Rescue Team, the North East Ambulance Service and their  Hazardous Area Response Team (HART) set up a line rig and they carried the injured kayaker on a stretcher up the steep river bank.

As soon as the Coastguard helicopter’s winchman arrived on the scene, the teams discussed the best plan for winching the kayaker out of the woods. There was an area on the steep ledge that was clear of overhanging trees and it was from there that the  kayaker was winched onto the aircraft for a quick journey to James Cook University Hospital. The helicopter was met by Redcar and Hartlepool Coastguard Rescue Teams who manned the helicopter landing site and helped with the transfer of the casualty to hospital staff.

“When we arrived on scene it soon became clear just how challenging the extraction was going to be for the MRT and HART teams. Our winchman made an assessment of the options for recovery from the air which were complicated by the trees, terrain and failing light, which would eventually lead to the final stages of the recovery being completed in the dark.

“Fortunately the teams on the ground, in consultation with our winchman, had identified a suitable clearing in the wood with help from the local farmer.  They carefully hauled the kayaker in the stretcher up the steep river bank to the gap in the trees and we were able to winch the kayaker onto the aircraft, using a hi-line to stabilise the stretcher during the recovery. This was manned by emergency colleagues from the local MRT.

“This rescue is a prime example of multiple agencies working together as one team to ensure the best possible care for the casualty. And we wish him the speediest of recoveries.”

Mark Colledge, Radio and IT Systems lead from the Teasdale and Weardale Mountain Rescue Team added: 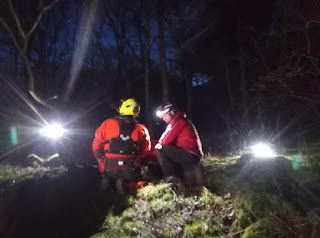 “We’re pleased to hear that the casualty is recovering well. We’d like to add a big thanks to our HM Coastguard helicopter rescue colleagues. It was very difficult terrain and we were able to get the casualty into medical care much more quickly and easily thanks to the helicopter crew.”

IMAGES: With many thanks to our colleagues from Teesdale and Weardale Mountain Rescue Teams for allowing us to share their images.