Six people rescued after getting stuck in the mud in Dorset


Specialist coastguard mud technicians spent over three hours digging people free after they got stuck in the mud in Dorset.

HM Coastguard received a 999 call from a member of the public just after 17:00 yesterday (1st Feb) saying that they could see a person stuck waist deep in the mud near Barton-on-Sea. 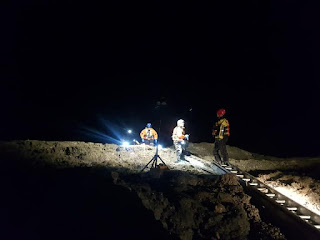 Coastguard rescue teams from Southbourne, Lymington and Poole, Dorset Police, Dorset and Wiltshire Fire and Rescue Service and South West Ambulance Service were all sent.
When the coastguard teams arrived it soon became clear that more people had become stuck attempting to help.

Specialist Coastguard mud rescue technicians, with help from Dorset Fire & Rescue’s mud team spent over three hours digging the people out.
In total six people had become stuck, with three needing to be dug free from the mud, all were recovered safe and well. 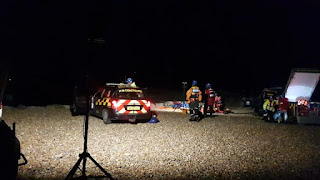 A significant part of the UK coastline could be categorised as soft ground. This will be mainly mud or quicksand. In either case it means that the foreshore is low lying, open to the elements, tidal and not accessible to unaided conventional vehicles. The UK Coastguard uses the generic term ‘mud rescue’ to cover mud, quicksand and any other substance on the shorelines from which a casualty needs rescuing.


People can also require rescue as a result of exhaustion while trying to wade through soft ground for all they may not be trapped. In all cases, the casualty may be at risk from incoming tide. The effect in both cases is that when the person tries to pull their legs free, they create a vacuum underneath their feet and around the leg which prevents escape and further movement can make the situation worse. One immediate measure that can be taken to prevent the casualty sinking further is to sit on the surface of the mud/quicksand, thus spreading the load and may reduce further risk to injured casualties.