December 17, 2019
As we begin to look back at the year that was in 2019, some of our coastguards – who were involved in November’s Remembrance Day Services across the country – recall what it felt like to represent HM Coastguard at such an important occasion and remember those who fell in two world wars and other conflicts.

Coastguards from across the UK gathered at HMS Collingwood, the Royal Navy training base in Fareham, ahead of the traditional Cenotaph Service in London (Sunday 10th November), to rehearse, practice and come together as one team, before they marched – with the world watching on – on a beautiful morning in the capital.

Here, with the help of Dayle Jones, from Belfast Coastguard, who once again played a key role in bringing 11 coastguard volunteers together, from as far away as Stornoway and close-by as Portsmouth, to commemorate Remembrance – we’ve rounded-up some of their personal highlights:

Emma Gasston, Maritime Operations Specialist at the National Maritime Operations Centre (NMOC), reflected after being part of the whole volunteer process: “From a coastguard’s perspective, I feel it is always important that we remember the significant sacrifices coastguard officers made in past wars and conflicts during Remembrance. We should be aware of our history and traditions which have enabled us to become the service that we are today.” 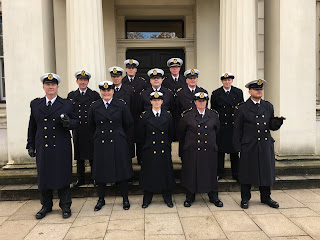 Linda Tetley, from the Poole 07 team, said that taking part in the HM Coastguard Remembrance contingent was an “amazing experience”. She went on to say: “The opportunity to stand tall, feel proud and be part of the parade at the Cenotaph in London was an experience that I will never forget.”

Linda added: “Over the course of training exercises and meet-ups, I had the honour of meeting new people, forging amazing friendships and creating lifelong memories.”

Paul Harris, from Lymington 10 Coastguard Rescue Team contingent, arrived at HMS Collingwood in Fareham for rehearsals and drill training – a few days before being part of the London-bound team. It was the first time he had been part of such an occasion.

“I felt honoured to represent HM Coastguard at such an emotional event,” said Paul. “I was very proud of the entire contingent and it’s a memory I’ll cherish forever.” 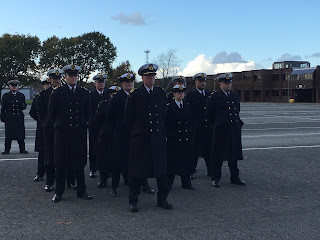 Ruth Appleby, who is a Maritime Operations Officer and based at the NMOC, described her memorable experiences and revealed enormous pride at being part of the commemorations.

“The two-minute silence at the Cenotaph will always stay with me – I’ve never heard London so silent. Indeed, I actually found it a little eerie just how quiet it was. It was a perfect day and very respectful moment to honour those who have fallen.”

Ruth added: “For me, another personal highlight was a thumbs up and smile we were greeted with from one of the passing veterans in a wheelchair. I loved the encouragement we received from him and thought it was a really lovely touch.” 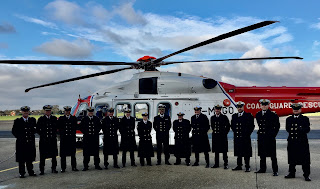 Daniel Thomson, who works in the Civil Service and volunteered to participate in the Cenotaph march on behalf of HM Coastguard, said the whole experience was “brilliant”. “The encouragement and support we received in every aspect was well above my expectations – from the excellent hotel accommodation to the food,” Daniel said.

He added: “The drills we completed as a team and with instructors improved our skills. They went out of their way to offer assistance at every single moment and all guidance was delivered with tonnes of enthusiasm.”

Haramandeep Toor, whose family have a military background, was honoured to represent HM Coastguard and also remember his paternal grandfather. “I wanted to honour him (my grandfather) by wearing his medals and taking part in the services. I was thankful for the opportunity and the efforts made by HM Coastguard in organising the events.”

Stephen McNally, a Senior Aeronautical Operations Officer, joined HM Coastguard in May 2019 and then applied to be a volunteer for the Remembrance Day services, which involved meeting up ahead of time at HMS Collingwood for two days’ worth of rehearsal.

Stephen said: “I was beaming with pride when I found out I had been selected, not because I thought I was better than anyone, but because it meant I could hopefully play a small part in showing my respect to the fallen men and women of every conflict and war that have afforded us the freedoms we enjoy today,” said Stephen, who previously worked as a former Royal Marines musician.

“We all felt 10 feet tall when we finished,” Stephen added.

And, as Sunday morning arrived, the HM Coastguard team completed the duties that were bestowed on them, which included marching and standing proudly for over two hours.