November 11, 2019
Watch the dramatic moment when a man was rescued by a HM Coastguard search and rescue helicopter in a remote area of Cornwall on Sunday (10th November).

The team on-board Newquay-based Sikorsky S92 aircraft were actually airborne and on their way to Land’s End for a routine training exercise – but received contact from the Falmouth Coastguard Rescue Team and the Aeronautical Rescue Co-ordination Centre (ARCC), reporting that a man had fallen into the water at Porthcothan, a coastal village between Newquay and Padstow.

Walkers at Park Head cliff tops in Porthcothan saw a local fisherman washed off the rocks at Bedruthan Steps and straight into freezing cold seawater.

Responding to the incident straightaway, the search and rescue helicopter headed to the scene but were roughly 30 minutes or so away from caring to the man.

Fortunately, during the time it took for the search and rescue team to arrive at Porthcothan, a quick-thinking member of the public managed to throw a life-ring buoy into the water and as close to the stranded fisherman as possible. 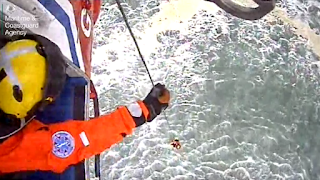 And, despite the buoy not having a direct line to shore, the throw was so accurate that it landed within the man’s grasp and enabled him to keep afloat, tread water and stay much closer to land, despite rocky waves.

And that intervention – along with the search and rescue helicopter’s rapid response – played a huge part in saving the man’s life.

“When we arrived at Park Head, we had our winchman ready to go because it was such a remote and challenging area,” said Mark Coupland, who was co-pilot in the successful rescue alongside captain Debs Bhattacharya.

“The fisherman had been treading water and didn’t have anything left.

“Our winch operator Phil Warrington and winchman Bungi Williams winched the man up as fast as possible, but it was a struggle to move him out of the buoy and move the rope clear of his body, as we lifted him up out of the water.”

Reflecting on the weekend’s rescue on Monday, Coupland added: “Whoever launched the ring from the cliff side really saved this gentleman’s life. The public also helped us locate the man, given they made sure they were visible by waving their arms to get our attention as we arrived.

“We wrapped the man in blankets as soon as we rescued him and his body temperature was -32 degrees. Again, that was another reminder of how tough the conditions must’ve been for this gentleman in the water.”

The search and rescue team transported the man from Porthcothan to Treliske Hospital, near Truro.

The fisherman was discharged from hospital on Sunday night.

Watch the video below: