People from across the Maritime & Coastguard Agency (MCA) paid their respects this Remembrance Day (10 November) by taking part in ceremonies to honour those who have fallen or lived through war.

Brian Johnson, Chief Executive of the Maritime & Coastguard Agency and Alun Newsome, Maritime Operations Controller, attended the Merchant Navy Memorial at Tower Hill to lay wreaths. And the MCA’s Richard Wilson, Head of the Office of the Chairman and Chief Executive, laid a wreath at a service in Southampton.

Alex Smith, the Deputy Head of Aviation and Maritime Operations (MCA) and Jen Hill, a Senior Coastal Operations Officer, attended the Field of Remembrance service at Westminster Abbey on 7 November.

At Westminster, a team of Coastguards, including representatives from volunteers marched with other services colleagues. And Coastguard Rescue Teams in regions throughout the UK paid their respects at local services and ceremonies. 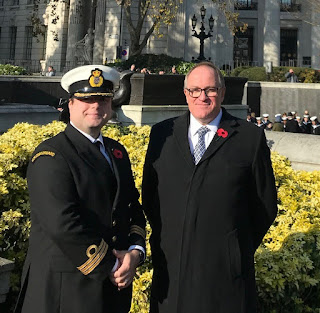 The Registry of Shipping & Seamen, part of the MCA, had a number of representatives taking part in ceremonies at the Cenotaph and Westminster Abbey. At the Cenotaph, Captain William James Barclay, a Fellow of the Nautical Institute, was accompanied by his wife Elizabeth.

He represented the Honourable Company of Master Mariners and laid a wreath.

Nautilus provided the representatives for the Merchant Navy to attend the service at Westminster Abbey.

The representative, who occupied the stall for the Tomb of the Unknown Warrior, is Mr Paul Dilks. His maritime career spans nearly 40 years.