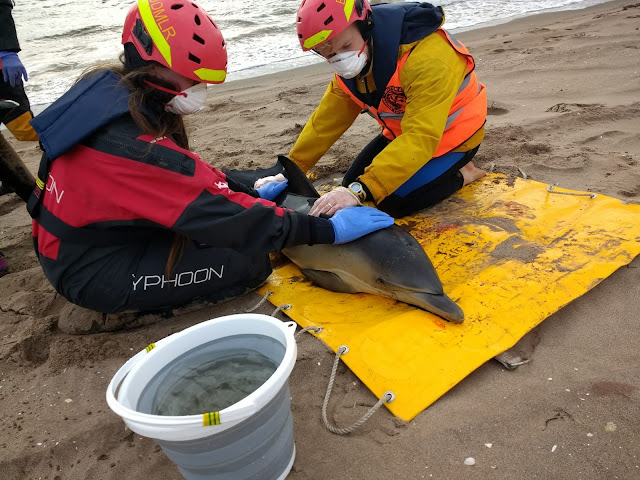 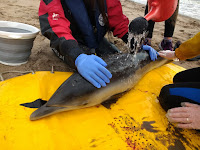 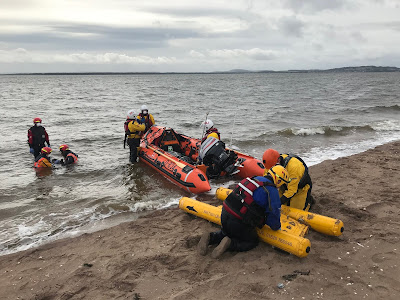 Two dolphins de’fin’itely had luck on their side (10 October) when HM Coastguard co-ordinated their successful and safe rescue from a beach at Monifieth, Tayside, Scotland.

A member of the public had spotted a dolphin on the beach and called 999 just before 8am  to alert the Coastguard. Very quickly, the local Coastguard Rescue Teams from Carnoustie and Arbroath and marine life rescue specialists the British Divers Marine Life Rescue (BDMLR) were on the beach to help and they were joined by the RNLI lifeboat from Broughty Ferry.

The first dolphin was a female common dolphin and the Coastguard teams made sure the area was secure so the BDMLR teams could work in safety.  The female dolphin was placed back in the water and appeared to be returning to the beach again, so the diving teams boarded the lifeboat to monitor her safe progress to deeper water.

A juvenile common dolphin, thought to be the calf of the first dolphin  also approached the beach and was safely returned to the water.

Hector Sutherland, a Senior Coastguard Operations Officer was also present to help the teams and co-ordinate the rescue on the spot.

“We work as one team with other emergency services to rescue people to safety and this was a particularly good example of that teamwork. It’s not that often we get to rescue two dolphins in one day but we regularly train for all sorts of rescues including marine life so we all pulled together to make it work. It’s de’fin’itely a happy one to remember,” he said.

“The collaboration between the emergency services teams was a critical factor in this successful rescue and the Coastguard teams were just fantastic. These dolphins were both healthy and well so we hope they will now be swimming back out to their more usual territory of deeper waters.”

HM Coastguard and the BDMLR would also like to give special thanks to the RNLI, the local community and the MoD who provided special support and assistance at this rescue. 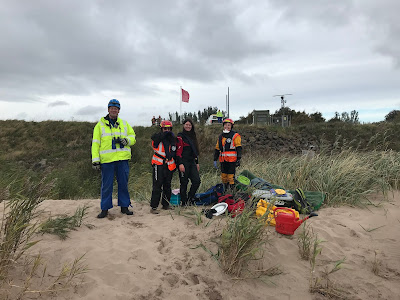 Left to right are: Rob Parry, Deputy Station officer Arbroath Coastguard Rescue Team with members of the BDMLR at the rescue site