It's a lucky dog's life

It’s a lucky dog’s life for terrier Archie who was rescued after falling from a cliff at Freshwater Bay on the Isle of Wight yesterday (3 September). 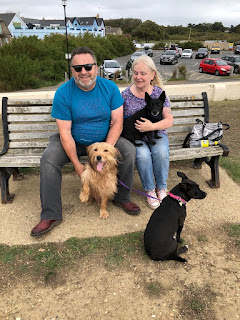 The four year old terrier had slipped and taken a tumble and ended up perched on a ledge at Fort Redoubt. Worried owners, Mr Brian Noakes and Mrs Noakes called 999 and asked HM Coastguard for help at 11.30am.

Coastguard Rescue Teams from the Needles went to the scene while the Freshwater Independent Lifeboat was launched. The lifeboat teams found the pup on a ledge with no obvious sign of trauma.

Within just half an hour of receiving the emergency call, lucky Archie was on board the lifeboat and on his way back to the lifeboat station be re-united with his very relieved owners and his other canine family members Mitsy and Chester.

The UK’s spectacular coastlines are ideal for exploring. By following a few simple safety tips from the UK Coastguard, we can make sure that people get the most of their trip to the coast.
- Always keep your dog on a lead near cliffs.

- Do not attempt to rescue a dog which is being swept out to sea. This is because you are likely to get in to difficulty and many dogs return to shore alive but some owners do not. Call 999 and ask for the Coastguard.