September 18, 2019
Director of Maritime Safety and Standards Katy Ware has been paying tribute to those who believed in and supported her through her career at the World Maritime Day Parallel Event being held in Columbia.
The event which was helping to spotlight issues affecting women in maritime that are relevant to the wider community gave Katy, who is also the UK's Permanent Representative to the International Maritime Organization an opportunity to reflect publicly on how she has personally been empowered in maritime.
The event was organised by Colombia Direccion General Maritime.
Katy said: 'Whilst I have been working in a man's world, there is no doubt in my mind that I wouldn't have got where I am without the army of men who have believed in me, supported me, trained me and counselled me.
'If we are to empower women in the maritime sector we must involve those men who have believed in us to lead by example. What we need in maritime is women and men who believe in themselves and support each other in all the work they do. The benefits to the wider maritime industry of an empowered group of people will be immeasurable.' 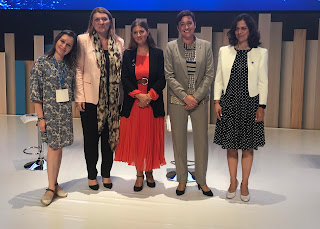