Bang on for safety at Lymington!


For our Lymington Coastguard Rescue Team, the day went off with a bang. Literally!

Thankfully a keen eyed member of the public who was out for a stroll spotted something unusual in the mud on the coastline at Lymington and he knew exactly the best thing to do. He also had the presence of mind to take a quick snap on his mobile phone which he later sent to us after he'd put us on alert by calling 999 and asking for the Coastguard. 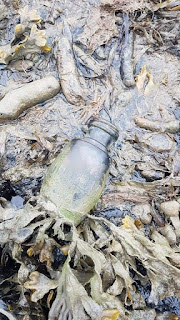 The local team from Lymington was sent on 6 September, together with colleagues from Hampshire Police to inspect the scene and take more photographic evidence. The EoD (known colloquially as the bomb squad) confirmed it was definitely an unexploded grenade and sent specialists to the scene to make it safe.

A controlled detonation was the answer and it meant that the teams could capture it all on camera from a safe distance.

Colin Tabor, Lymington's station officer  said: "This area was used for the D Day landing preparations during the second world war and where munitions were stored for equipping the craft. So we're all very aware that there could still be some of these munitions still around the coast. Thankfully not every day goes off with such a bang and we're glad that the caller didn't hesitate to get in touch when he saw something unusual," he said.

Tip: If you see something unusual around the coast and think it could be an ordnance, please do not touch and stay well clear. Call 999 and ask for the Coastguard.