September 13, 2019
The team which oversees work around autonomous ships has been showing people how they will work in practice, including how they communicate with each other.
People from the Maritime Autonomy Regulation Lab, which was set up to look at how the Maritime & Coastguard Agency will regulate autonomous surface ships and support the wider UK industry say it’s about exploring how to keep regulation up to speed with new technologies.
This week the team, including the Government’s innovative Policy Lab, was at the Department for Transport’s London International Shipping Week technology showcase giving people the opportunity to consider how autonomous ships may communicate with other ships using an art installation of flags, with both current and speculative flag designs.
They were joined by specialists from Solis Marine who showed how data can be used to support the testing of autonomous ships and systems. 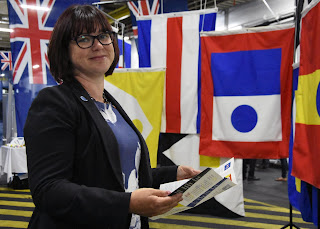 Katrina Kemp from the Maritime & Coastguard Agency is working on the project. She said: “Autonomous shipping will enable us to put ships in places where we wouldn’t want to risk people’s lives. This innovative approach to engaging with people to discuss how the MCA can support these developments is an exciting time. The work is bringing together people from across industry, academia and government including those we may not have engaged with previously.”
MARLab has been established to explore how the MCA regulates Maritime Autonomous Surface Ships and support UK industry. Funded by the Department for Business Energy and Industrial Strategy and the Regulators’ Pioneer Fund this work promotes the on-water testing of autonomous ships in the UK.
It will explore how to develop UK regulations that can keep pace with fast moving new technologies whilst ensuring the United Kingdom’s seas and coastline remain safe and environmentally protected.