Jenson and Ruben Powell don’t know that they’re record-setting twins. As they reach their first birthday, their mum and dad are happy to say they won’t let them grow up without reminding them as often as they can.
They are the youngest surviving pre-term twin boys born in Britain, arriving at just 22 weeks and 6 days. Weighing in at just 535 and 590 grams, Jenson was given a 0% and Ruben a 20 -30% chance of making it beyond the first 48 hours.
“It really is a story of hope and miracles,” their mum, Jennie Powell, says. “They defied every set of odds that they were given.”

Jennie and husband Rich were on holiday in Cornwall, in August 2018, taking a break at what was a critical stage in the pregnancy.

Two years earlier, their son, Linnie, had lost his fight for survival (born at 23 + 4 weeks) as a result of complications related to the rarely-mentioned streptococcal B (Strep B) infection.
“The twins’ pregnancy was being closely watched as a result of what we had been through when we lost our first child,” says Jennie. “We were advised to get away from things, and try to be as relaxed as possible – to be away from work and the ‘demons’ associated with our previous pregnancy.
“We have a holiday in Cornwall every year, and we were just at the end of two weeks away.  I was nervous, because of the timings, but it also meant I was much more aware of the warning signs. I felt some pain, and just knew that something wasn’t right.
“We went straight to hospital, and it was suddenly all too familiar. The hospital ran tests and confirmed I was having contractions and my blood results indicated an infection. It was later confirmed as Chorioamnionitis caused again by streptococci group B.
“Everything that followed, in the days after that, we can only describe as miraculous – every decision made by the people who were looking after us ensured that our boys survived and are here today.” 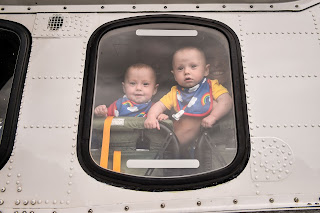 Jennie presented at the Royal Cornwall Hospital, Treliske on August 16. The first critical decision by the maternity team was to treat Jennie with steroids to provide the babies with support for their chronically underdeveloped lungs.
“The Royal Cornwall Hospital doesn’t have the ‘Level 3’ neonatal care unit we needed and, when the team started making calls, there were no spaces at our local hospital at home in Brighton - or the three other closest units to Cornwall.
“The hospital team didn’t give up calling, and when the John Radcliffe Hospital, Oxford, said they could take us that afternoon we found ourselves being airlifted by the HM Coastguard helicopter from Newquay.”
Capt. Jorg Brunner, co-pilot Ivan Hamilton, chief crewman Ian Copley, and winchman-paramedic Niall Hanson flew Jennie, and midwife Jane Parke, to Oxford.
“That was a lifesaving decision. Getting me to a Level 3 unit quickly allowed the team at the John Radcliffe Hospital to continue monitoring us, when we needed it most.
“After that day, Jane and the helicopter crew didn’t have any idea about what had happened to us – that the boys had survived. Being able to meet them again on the anniversary is so, so wonderful.”
Jenson and Ruben Powell were delivered by emergency c-section on August 17, at 16:20 and 16:21. They were taken immediately to neonatal intensive care - between them weighing less than 1.2 kilos - and facing a catalogue of major events in the weeks and months to come.
“I was able to touch a finger on each hand before they were taken away, with Rich following them. When I was able to go and see them in their incubators, side-by-side, these tiny little boys, the nurse who was with me couldn’t give us much hope.
“We were being prepared for the likelihood of saying goodbye to another child. Boys have a lower survival rate, and we were preparing to see one of them not make it. Ruben had maybe 20-30%. Jenson wasn’t expected to pull through.” 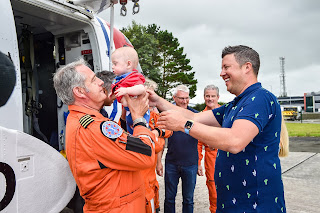 As 48 hours passed, and with the family still counting in hours rather than days and months, the boys kept fighting. At 8 days post-delivery, Ruben had his first lifesaving operation after his intestines began failing.
“The consultant had an instinct. It was incredible, some scans aren’t normally carried out unless a baby is presenting symptoms but he decided to take a look just in case and he found he had developed Necrotizing Enterocolitis (NEC) where the intestines start to die. Again we were told, the survival rate for such an operation was incredibly low even for a child weighing 1.5kilos.”
Ruben was just a third of that weight, but he survived the operation, and a stoma was created removing over 5cm of intestine, he had a stoma until he was 5 months old. After that, the procedure was reversed and today, his body is functioning normally.
Jenson meanwhile had his own battle to fight, with weaknesses in his lungs a particular concern but, like his brother, he too fought on and grew stronger every day.
As well as being the youngest surviving twin boys, the Powell pair are also the youngest to receive a vital eye injection to cure retinopathy of prematurity (ROP) – the same condition which took Stevie Wonder’s sight.
“The standard of care we received was outstanding. The boys had it all – infections, more than 20 blood transfusions, sepsis, pneumonia, eye injections and laser surgery, hernia reversal you name it. The team at John Radcliffe were on top of everything.”
“Today, the boys are thriving. They will continue to have chronic lung disease until they are about three, which can make them more vulnerable to colds and infections, requiring oxygen support but otherwise they are doing really well. We sometimes have to stop and remind ourselves of all they’ve been through, because it’s so different today,” says Rich.
“A year ago, it felt like Cornwall and Oxford were the last places we needed to be. We hardly knew anyone miles away from home. But they were the exact places we needed to be. We thank our stars that’s where we landed. Everyone we met made a decision which saved our boys.”
Following the loss of their son Linnie the couple have campaigned for baby loss awareness and support with Sussex based charity Oscar’s Wish Foundation, raising more than £16,000 supporting the new room for bereaved parents at Royal Sussex Hospitals. https://www.oscarswishfoundation.co.uk/
Since leaving the John Radcliffe they have joined up with local Oxford charity SSNAP to create a charity page to provide support for the team at the John Radcliffe Neo Natal unit. https://www.justgiving.com/fundraising/jensonandrubenforevergrateful