Yacht aground at Chapmans Pool, Dorset 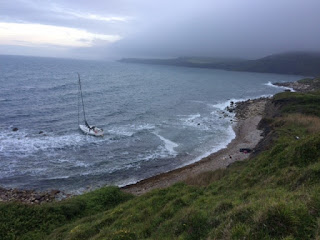 HM Coastguard received a call from a member of the public shortly after 1am today (30th May) saying that a man had come ashore in a small inflatable tender at Chapmans Pool, Dorset.

The man explained that his 11m single mast sailing yacht had been wrecked and there was no one else on board. The man was passed into the care of the ambulance service and taken to hospital to be checked over.

Swanage, St Albans Head Coastguard Rescue Teams and Swanage RNLI lifeboat were sent to search the area and the yacht was found aground on rocks.

Dorset Council and the Environment Agency have been informed along with the Maritime & Coastguard Agency’s Counter Pollution Team who will continue to monitor the situation.