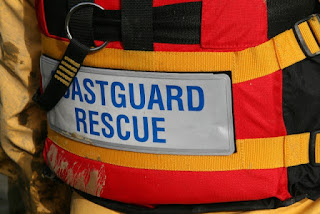 HM Coastguard received a call at around midnight on 5 May from a man saying he and two other men had fallen down a cliff at Porthleven and they required assistance.

Falmouth Coastguard Operations Centre coordinated the rescue and Porthleven, Penzance and Mullion Coastguard Rescue Teams, RNLI Lizard all weather lifeboat, a HM Coastguard Area Commander and HM Coastguard search and rescue helicopter based at Newquay were sent to the scene, along with South Western Ambulance Service and Devon and Cornwall Police.

The Coastguard helicopter also transferred three critical care paramedics from Cornwall Air Ambulance based at Newquay airport, to provide additional support with the casualties at the scene.

In the darkness and with the tide coming in at the base of the cliff, the man that called the Coastguard was able to use the torch on his mobile to help identify their exact location.

The helicopter was able to transfer the critical care paramedics and several Coastguard Rescue Officers to the base of the cliff to attend to the casualties on scene, where they then helped to transfer the three men on to the helicopter to be airlifted to Derriford hospital.
Martin Leslie, Coastal Operations Area Commander, said ‘This was a demonstration of exceptional joint-emergency service working in an extremely difficult environment. The helicopter crew showed outstanding skills transferring the teams to the scene. Special praise must also be given to the critical care paramedics who gave excellent pre-hospital care to the casualties’.