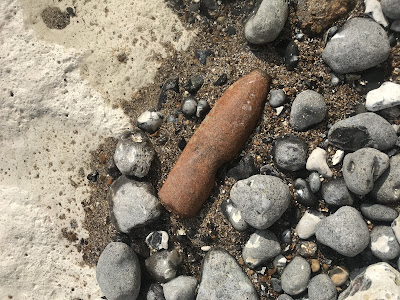 HM Coastguard and the Military Explosives Ordnance Disposal (EOD) team are currently on scene at Beachy Head dealing with a possible unexploded shell that was discovered yesterday.
Just before 8:50pm yesterday (19 May) HM Coastguard received a call from a member of the public reporting the suspected shell halfway between Belle Tout Lighthouse and Belle Tout layby.

The photographs were immediately sent to the EOD team.   The shell is approximately 3 inches wide and 12 inches long.

Eastbourne and Birling Gap Coastguard Rescue Teams have set up a cordon around the ordnance restricting public access as a precautionary measure.
The EOD team arrived on scene this morning and are planning a controlled explosion at low tide later this evening.
HM Coastguard is advising people to keep at a safe distance until it has been declared safe by the EOD team.

UPDATE - The EOD team have inspected the device again and declared it a safe empty metal casing - no detonation will be happening.  The cordon has been lifted.