Six rescued after becoming trapped by tide on cliff in Devon


Two adults and four children rescued from cliff at Putsborough Sands, Devon, yesterday (4 May) after becoming cut off by the tide. 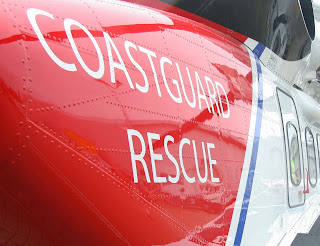 HM Coastguard received a 999 call at around 4.10pm from a member of the public reporting that they could see six people around 40ft up the cliff. Although the group were showing no obvious signs of being in any distress, with the tide fast coming in, it appeared that they had no way to get to safety and would require assistance.

Croyde and Mortehoe Coastguard Rescue Teams, RNLI Appledore Inshore lifeboat attended the scene to help the people to safety.  HM Coastguard search and rescue helicopter based at St Athan was also called in to assist and, with the RNLI lifeboat remaining on scene to provide safety cover, all six people were winched off the cliff. The helicopter then landed at the top of the cliff to drop them off the with the waiting Coastguard rescue teams, where they were all confirmed to be safe and well with no injuries.


Gavin Ibbotson, Maritime Operations Officer at Falmouth Coastguard, said ‘The member of the public did absolutely the right thing to call the Coastguard when they thought someone may be in difficulty and needed assistance.

We would urge people to please remember the tides - it's so easy to get caught out by quickly moving tide.  You can now download apps for your phones that can help keep you safe.'

Walkers should consider whether they could become cut off by the incoming tide and should not attempt to climb cliffs as shortcut back to the top.

Always check the weather and tidal conditions before you set out so that you can prepare accordingly.

Don’t take risks, but if you do get into trouble or see someone else in difficulty call 999 and ask for the Coastguard.