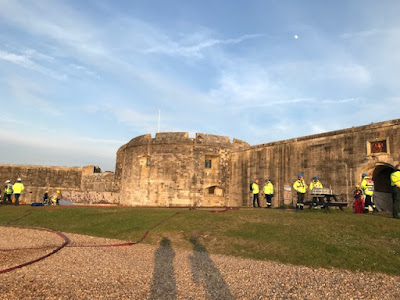 Emergency services and front-line organisations have been testing out how they would respond to a major incident.


The multi-agency exercise took place at Hurst Castle, Milford on Sea in Hampshire. The scenario was based on a fire having affected three floors of the main keep of the castle, which stands at the end of a 1.5 mile long shingle spit. There were also ‘casualties’ on all the floors who would need to be rescued.

HM Coastguard co-ordinated the exercise, which was designed to test how all the emergency services would work together, particularly focusing on responding to an incident in a remote and inaccessible location. 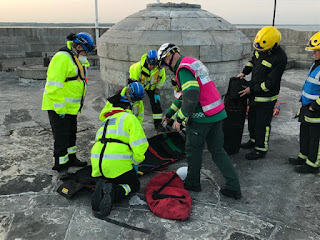 Given the logistical challenges of accessing the castle via the shingle spit, HM Coastguard was assisted by the Hurst Castle Ferry in the deployment of Hampshire Fire and Rescue Service (HFRS) to fight the fire, to find the ‘casualties’ and rescue them. HFRS were swiftly followed by South Central Ambulance Service (SCAS) and SCAS’s Hazardous Area Response Team (HART), along with Lymington and Southbourne Coastguard Rescue Teams (CRTs). Hampshire Police were also on scene to provide assistance and RNLI Lymington inshore lifeboat also played a valuable part in the rescue of a simulated casualty from the sea next to the castle.

“This is an incident we hope we will never see happen, but this was an extremely valuable exercise in testing how well we emergency services coordinate and work together. The opportunity to work alongside our partners on an exercise like this allows us to hone our skills in dealing with a major incident of this nature and to achieve the best outcome possible. It provided a great opportunity to build on our experience and to identify whether any lessons can be learned to continually improve how we work together.

We are very grateful for the involvement of all the emergency services that took part this evening, and for all the hard work and excellent teamwork demonstrated. A special thank you also goes out to the people that played the part of the casualties, and last but not least to the team at Hurst Castle itself”. 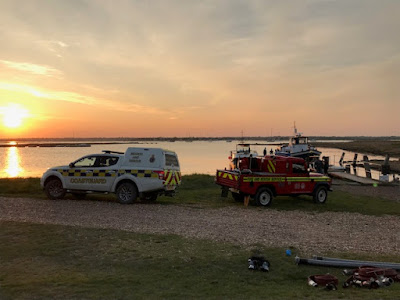