Two free climbers called 999 and asked for the Coastguard after getting into difficulty at the Isle of Wight beauty spot, The Needles, just before 4:40 this afternoon (30 March).

The pair got into difficulty approximately 35 meters above the water, on the northern side of the second island at the Needles. Freshwater independent lifeboat, Needles Coastguard Rescue Team and the HM Coastguard Search and Rescue Helicopter from Lee on Solent were all sent, and the Needles NCI assisted by providing information.

The climbers were winched off the Needles by the helicopter and taken to the headland, where they were met by Needles Coastguard Rescue Team.

William Mills, Senior Maritime Operations Officer, HM Coastguard said, ‘When the free climbers into difficulty they did exactly the right thing by calling 999 and asking for the Coastguard. Thankfully after being checked over by the helicopter’s winchman paramedic both men were able to make their own way home.

‘Remember if you get into difficulty or see anyone in trouble out at sea or along the coast call 999 and ask for the Coastguard.’

Please note we have no footage or images from the incident. 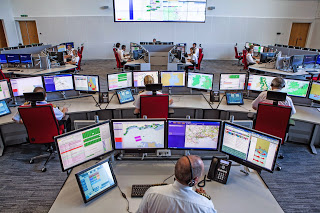