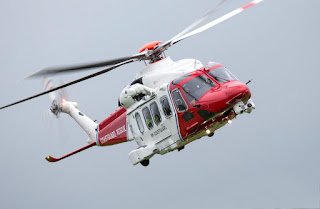 Four adults (two male and two female), a young girl and a dog have been rescued by Coastguard helicopter after being cut off by the tide at Charmouth yesterday afternoon (17 February).

HM Coastguard received a call from one of the adults at 4.00pm reporting that they were cut off by the tide, about 30 minutes’ walk from the fossil centre, and that the sea was about 1m away.

The Coastguard sent Lyme and West Bay Coastguard Rescue Teams, the Lyme Regis RNLI lifeboat was launched and the St Athan Coastguard helicopter was scrambled. Dorset Fire and Rescue Service also attended.
HM Coastguard remained on the phone to reassure them that help was on its way until the rescue crews arrived.

All five plus the dog were airlifted ashore by helicopter and required no medical treatment despite their ordeal.

Remember to always check tide times online or at the beach before you set out and ensure that you have plenty of time to get back before the tide comes in.
Find local coastal weather and local tide times at: www.bbc.co.uk/weather/coast_and_sea/tide_tables