February 21, 2019
National Maritime Operations Commander Mark Rodaway OBE has been shortlisted for a national Lifetime Achievement award in recognition of his contribution to search and rescue co-ordination.
Mark, who is based at the National Maritime Operations Centre in Fareham, Hampshire, is one of three finalists in the Control Room Operators Lifetime Achievement award category and will be attending the ceremony next month. 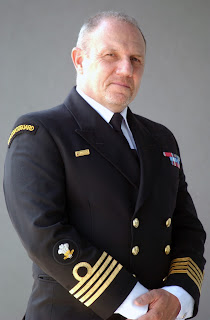 He has overseen many notable incidents including the grounding of the car carrier Hoegh Osaka in the Solent in 2015, the rescue of 14 yachtsmen on the Clyde Challenger, 500 nautical miles off Land’s End, as well as the Napoli grounding and subsequent looting in 2007, off the coast in south Devon. Mark also had search and rescue oversight for the duration of the Olympics 2012 sailing events in Dorset.
Mark has also been heavily involved in training operations room staff both in the UK and internationally, giving the benefit of his expertise to the new recruits and spends time mentoring them in the work environment.
He has already received a number of awards for his work including the Honorary Commodore Award from the Prince of Wales in May 2008 and the OBE in 2012.
Mark said: ‘This has been my life’s work for very nearly 30 years. I remain passionate about the emergency response business and proud of HM Coastguard’s commitment to saving lives on the coast and at sea. It’s a privilege to lead the team delivering search and rescue incidents on the front line and a real honour to be shortlisted for an award which recognises the sterling work done by all our frontline emergency services and those who deal with potentially life and death situations.’
Chief executive of the Maritime & Coastguard Agency Brian Johnson said: ‘Our frontline staff deal with serious situations and incidents on a daily basis. They have to assess information, reassure frightened people and institute and carry out search and rescue plans to provide the best possible outcome to difficult incidents.
'I’m delighted that Mark’s commitment and contribution to search and rescue has been recognised in the shortlisting for Control Room Operators awards.’


More than 400 nominations were received for all the ADP Control Room awards with the ceremony due to be held on 7 March in Nottingham.