The man was seriously hurt. Although he was alive he was in a precarious position on cliffs on St Kilda, on the Outer Hebrides, Scotland with a 200 foot drop below him. It became clear that the helicopter from Stornoway would not be able to get him out. Step forward the Coastguard Rescue Teams, who've been nominated for an award and have been retelling the story of that day.
Ask station officer Willie Campbell about the geographic challenges the teams faced that day and he’ll shake his head. ‘Imagine the most remote place you can think of,’ he said, ‘And even then it’s probably not as remote as this cliff in St Kilda.’
The call came in around 12.20pm on 26 June 2018. Stornoway Coastguard Operations Centre was told that an 87-year-old man had slipped and fallen. It was quickly decided to send a Coastguard Rescue Team with rope rescue equipment so the man could be loaded to the helicopter for transfer. Stornoway, South Lochs, Bragar, Tarbert and Scalpay Coastguard Rescue Teams were despatched and the HM Coastguard helicopter from Stornoway put on standby to move out. 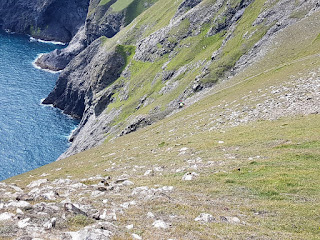 On scene, it became very clear, very quickly that while the man was still alive, his position was precarious, to say the least. If he moved, there was a 200 foot drop awaiting him. Those on scene saw that sending in the helicopter could prove fatal to him – the down draft could blow him over the edge. There were no safe helicopter options. A back up team was called to make the journey with extra equipment, along with Leverburgh RNLI lifeboat.
Rope technician Nathan Harris had been sent down because it was clear the man had slipped further. His position was becoming increasingly more precarious. As Nathan arrived, two things were apparent – the first was that the injured man’s legs were dangling dangerously over the edge of the precipice above the 200-foot drop and the second was that the man was too exhausted and hurt to be able to do much to help those helping him. Nathan secured him with a rescue strop.
Senior Coastal Operations Officer Ronald Maclean, along with his fellow Coastguards and the helicopter crew decided that they couldn’t wait for back up. The rescue needed to be carried out as soon as possible. It was already nearly half past two and time was running out. The challenge was immense. They only had one set of rope rescue equipment and it would mean having to adapt normal procedures to get to the man. If they waited, there was the distinct danger the injured man might die. It was a stark choice. In fact there was no choice. 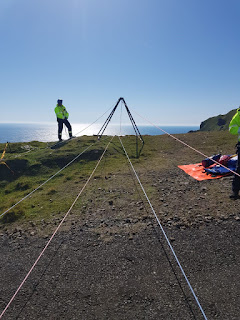 Ronald said: ‘The conditions were difficult. It was a very hot day making the hard work seem even harder. But we had to move as fast as we could or the man could have died.’
A second technician – the station officer - Willie Campbell was sent down with a stretcher to work alongside Nathan to bring the man back up. Working together in the kind of teamwork that saves lives, the two men made the man safe on the stretcher and he was gently raised to the top. It took some time. He was finally back at the top along with the two technicians just before 4.50pm.
He was taken on board the helicopter and taken to Western Isles Hospital. The man has recovered well and is apparently planning his next adventure.
Coastal Operations Area Commander Murdo Macaulay has nominated all those involved for a special award.
He said: ‘We often talk about the professionalism of our teams in difficult spots. This was one of those occasions where this coupled with decision making in life or death situations undoubtedly saved this man’s life.’