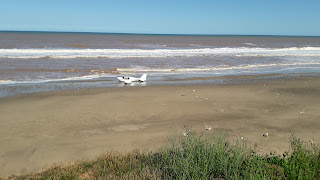 A pilot has had a lucky escape after his light aircraft crashed on the shoreline of Withernsea, Humberside earlier today.


At 11.35am today (Wednesday 10 August 2016) UK Coastguard received a distress beacon alert indicating that someone was in difficulty off the coast of Withernsea, east of the Humber Estuary.


Withernsea and Easington Coastguard Rescue Teams, the UK Coastguard search and rescue helicopter based at Humberside and Withernsea RNLI inshore lifeboat were immediately sent to the scene.  Whilst undertaking the search, the UK Coastguard received a 999 call from the Pilot reporting that he had been able to clear himself from the wreckage and make his way up a cliff to a nearby house.
It was quickly established that he was the only person on board.  He is currently being assessed by the Yorkshire Ambulance service on scene.


The UK Coastguard helicopter has located the wreckage which has now washed up on the beach.  The Coastguard Rescue Teams are now on scene with Humberside Police.


The helicopter and the RNLI lifeboat have now been stood down and are returning to base.


Air Accident Investigation Branch has also been informed of the incident.


Bev Allen, Duty Controller for the UK Coastguard said:  ‘We received a distress beacon alert so we immediately sent the Coastguard Rescue Teams, Coastguard helicopter, RNLI lifeboats to the area and we also sent out a broadcast to vessels in the area.  Subsequently, we took a phone call from the casualty who had reported he had crashed his aircraft on the shoreline and he had made his way up the cliff to a nearby house.

'It’s fortunate the pilot was equipped with a 406mhz beacon which had alerted us to the fact that he was in difficulty.  He had the correct safety equipment to alert us to his predicament and we are pleased that he’s come out of this incident relatively unscathed.’