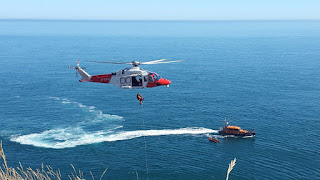 Yesterday (Monday 16 July 2016) at around 3.30pm a member of the public informed the UK Coastguard that a climber had fallen about 40ft from the cliffs between Anvil POint and the Western Mile Markers. 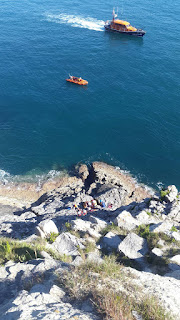 Swanage and St Albans Coastguard Rescue Teams were immediately sent to the scene, along with the Swanage RNLI All Weather Lifeboat.

The RNLI put a crewman ashore whilst the Coastguard Rescue Teams set up to put a technician over the cliff.

The UK Coastguard search and rescue helicopter based at Lee on Solent was then called in to airlift the climber to Southampton Hospital.

The Swanage lifeboat took one of the climbing party back to the Lifeboat Station whilst the Coastguard team brought the second climber back up the cliff.  Dorset Police also assisted at the scene with their off road 4x4 Rhino helping with getting the equipment and the team to the scene.