A short history of HM Coastguard 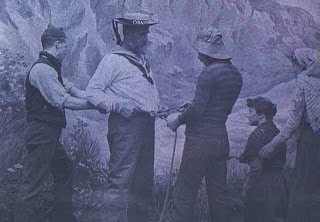 Today HM Coastguard is a world leader in maritime search and rescue. Looking back almost 200 years, the goods, which now travel by road, were carried by hundreds of small ships. Year in year out dozens of ships and hundreds of lives were lost within sight of the coast. Public shock and dismay at the tragedies drove forward the creation of national life saving organisations. Though it’s beginnings lie in those decades HM Coastguard originated not to meet the dangers of the seas but to combat a threat to the country’s economy and security – smuggling.

As soon as medieval taxes were charged on imports and exports, people began smuggling. By 1743 th
e estimate was that half the tea drunk in Britain was illegally imported and shows that smuggling was highly profitable. Smugglers have often been romanticised but the reality was brutal. Local people lived in fear, with violent reprisals on informers and the murder of revenue officers, while corruption enabled smugglers to evade harsh penalties.

In 1809 the Board of Customs formed the preventative water guard to fight smugglers and this small force used boats to patrol every bay and cove. In 1816 the guard was placed under the Treasury and at each station the chief officer and chief boatman were experienced naval seamen or fishermen. In bad weather they formed a shore patrol.

Although created to end smuggling, the Preventative Water Guard quickly acquired extra duties and were instructed to take responsibility of shipwrecks to safeguard cargoes and vessels from looters. In addition the boatmen were to train with lifesaving equipment, supplied by the Board of Trade.

In 1821 a Committee of Inquiry examined every aspect of the Customs service. It recognized the Preventative Water Guard as a major force against smuggling and recommended that it again be controlled by the Board of Customs. In a minute dated 15 January 1822, the Treasury accepted the proposal noting the new force would be called ‘Coast Guard’ which is, in effect, the birth certificate of HM Coastguard. The words were linked in the twentieth century.

The first Coastguard instructions were published in 1829 and are the precursor of the current operating instructions. In 1831 it was decided that the Board of Customs Coastguard should replace the Coast Blockade on the whole coast and the Admiralty made its own proposal. It won the right to appoint Coastguard Officers and to select Boatmen from paid off naval crews, so setting the scene for the Coastguard as a naval reserve and recruiting agency.

Within a decade Coastguard vigilance was praised for greatly reducing smuggling, though lower taxes helped end illegal trade. The Admiralty was already re-styling the Coastguard with naval style uniform and drill, and training on large guns for coast defence. The Coastguard continued to take charge at wrecks and to save lives. The Board of Trade issued life saving apparatus to Coastguard stations, thus fulfilling its responsibility for safety at sea imposed by the 1854 Merchant Shipping Act.

This was opposed by the Board of Customs and the Board of Trade who championed the need for life saving and revenue protection. An inquiry in 1821 found that the Coastguard had become the eyes and ears of many organisations with coastal interest.

For the admiralty they provided visual signalling and telegraphy, reported fleet movements, rendered mines safe, undertook recruitment and reported changes in navigation marks to the Hydrographer. For the Board of Customs and Excise they searched vessels, supervised discharge of cargoes, collected dues from coastal vessels, kept shipping statistics and patrolled the coast. For the Board of Trade they assisted ships in distress, acted as Receiver of Wreck and operated life saving apparatus.

In addition to these duties, they also assisted the Post Office and Lloyds with telegraphy and wireless, provided statistics to the Fishery Department, enforced quarantine regulations for the Agricultural Department, made meteorological reports to the Air Ministry, passed distress calls to the RNLI; and reported faulty navigation aids to Trinity House. 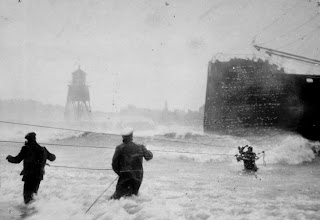 In 1923 the Coastguard was placed under the Board of Trade and dedicated to life saving, salvage from wreck and administration of the foreshore. The new force was sanction by the Coastguard Act (1925). The early Coastguard had been caught between the needs of different government departments, but this change meant they could now focus on the needs of seafarers, especially the scope for new technology to improve both safety and rescues.

The 1920s Coastguard kept a visual watch. Stations overlooking major shipping lanes and hazards maintained constant watch day and night and were able to summon auxiliaries to intermediate stations should visibility decrease or bad weather set in. An inquiry in 1931 correctly predicted that increased use of radio would
eliminate the need for visual watches; this initiated controlled reduction in Coastguard stations and lookouts.

This preventative role has evolved into specific modern tasks. Since 1967 shipping between Margate and Beachy Head has been separated into northeast and southwest bound lanes. Using computer enhanced radar Coastguards monitored this channel traffic, warning vessels which contravened the special rules.

Following the ‘Torrey Canyon’ (1969) oil spill, Coastguards were tasked as the early warning system for pollution control. Coastguards also provided liaison and training to enhance the search and rescue awareness for the merchant marine and oil/gas industry.

Pleasure boating became popular in 1960’s and today, of the 20k plus incidents handled annually by the Coastguard, are a result of the ever growing list of coastal pursuits. The scope of Coastguard coordination has extended as new facilities have been created to match modern rescue situations. 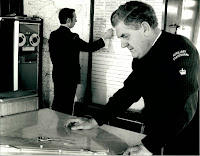 Since 1964, Coastguard rough terrain vehicles have increased mobility and provided mobile communications bases. Military helicopters were first used for rapid rescue from the late 1940s and Coastguard helicopters supplemented military cover from the 1980s when minimum response times were set.

The first use of contracted SAR helicopters was in 1971 when HMCG contracted Bristow to supply a SAR helicopter to cover for the RAF at Manston when they left that airfield for about 2 years due to overseas commitments.

In 1998 the Marine Safety Agency and the Coastguard Agency were joined to become the agency as it is today. The MCA exists to promote the high standards of safety at sea, to minimise loss of life amongst seafarers and coastal users, to protect the environment by minimising pollution from ships and to respond to maritime
emergencies 24 hours a day.

This clear definition of the role of HM Coastguard within the MCA has enabled the MCA to focus on introducing the best available technology, which means that HM Coastguard is a world model for search and rescue coordination.